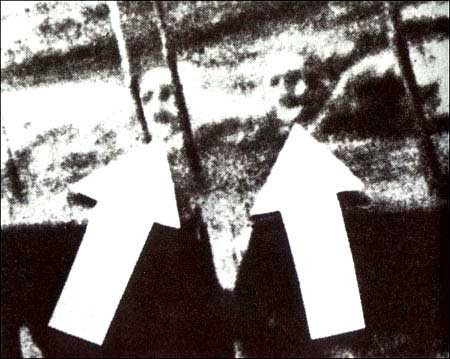 
James Courtney and Michael Meehan, crew members of the S.S. Watertown, were cleaning a cargo tank of the oil tanker as it sailed toward the Panama Canal from New York City in December of 1924. Through a freak accident, the two men were overcome by gas fumes and killed. As was the custom of the time, the sailors were buried at sea. But this was not the last the remaining crew members were to see of their unfortunate shipmates.

The next day, and for several days thereafter, the phantom-like faces of the sailors were seen in the water following the ship. This tale might be easy to dismiss as maritime legend if it weren’t for the photographic evidence. When the ship’s captain, Keith Tracy, reported the strange events to his employers, the Cities Service Company, they suggested he try to photograph the eerie faces – which he did. One of those photos is shown here.