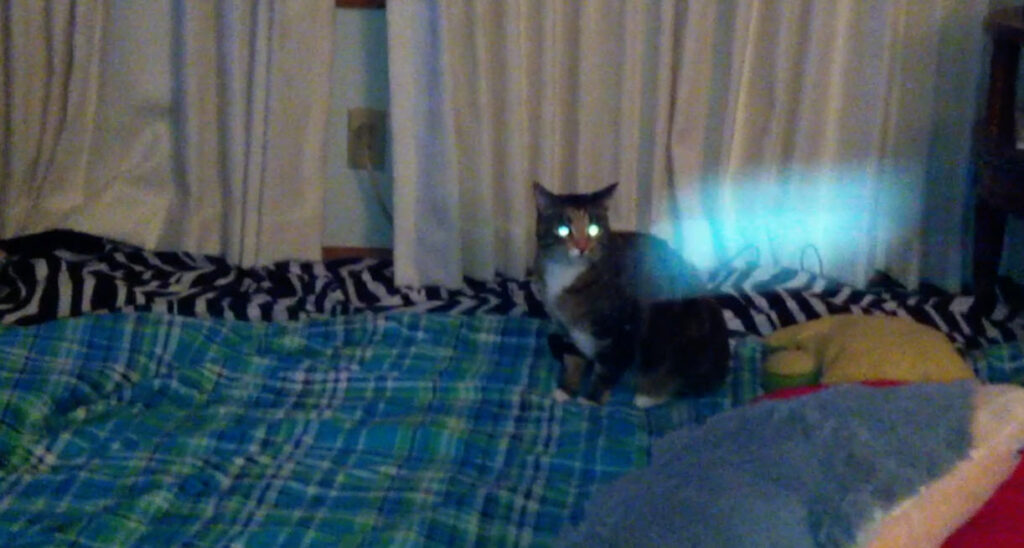 The following case was submitted to The Black Vault on February 18, 2018. The case was assigned to TBV Investigations team member Jeremy Enfinger for investigation.

According to the witness:

“Sighting occurred while filming my cat while my now ex girlfriend and I were temporarily living at her grandmother’s house while she was in a nursing home.

We were having a stupid conversation about cats and how awful it sounds when they have sex. lol. While we were filming and talking a bright blue object shoots across the screen from right to left.

It appears that the cat sees the object out of frame and then follows the object as it crosses though the frame. I have had people on reddit who believe that this is the reflection from the cats eye. This is not a possibility for one, because in the frame by frame breakdown of the object, there is a visible timing difference between them.

Also there is a visible figure of something inside of the object.

The highest visibility being in 2-3 of the frames.”

The anomaly occurs at 1:25 into the video, towards the end. 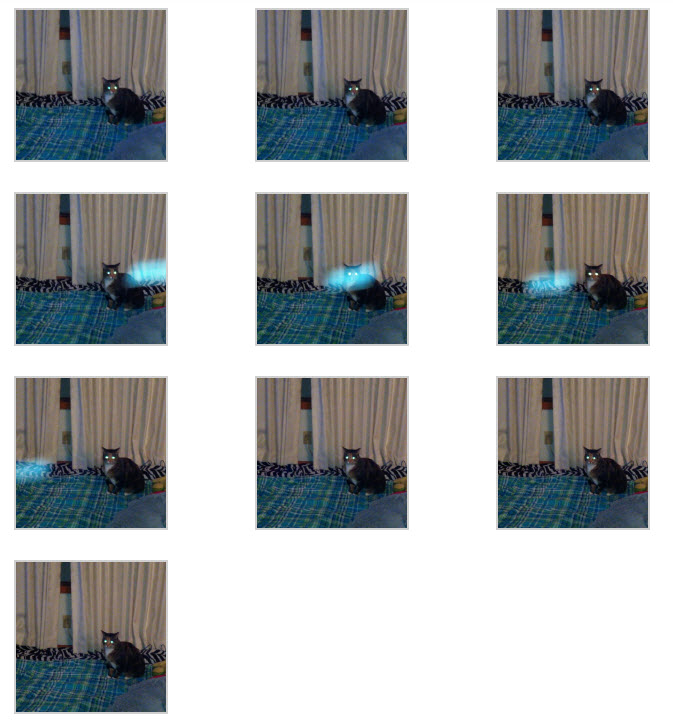 A video was submitted by a witness depicting an indoor video of the witness’s cat sitting on a bed when a blue object enters the frame and moves right to left rapidly across the screen.

According to the witness, the cat “follows the object as it crosses through the frame”. Two individuals were in the room (including the witness) at the time of the occurrence and did not report visibly seeing the object in front of the camera. A female notices the object when viewing the video screen and comments accordingly.

The witness claims to have a very clean home with no bugs or excessive dust, and a normal temperature at the time the video was taken. Also submitted with the video were frame-by-frame still shots of the object, as well as images with a negative filter and an x-ray filter.

Further discussion with the witness revealed there was a wall behind the camera with no windows or light sources.

Screen right (where the object enters the view) contains the kitchen area of the home and a television is on and can be seen on some frames of the video screen left.

Color analysis was performed on the original video file.

Results included similar color schemes coming from the television screen left and in the reflecting light on the curtains behind the cat.

This hue from the television screen is not an exact match, but very close to the color of the object passing through the frame.

However, there is a tissue box in the upper right-hand corner of the screen that softly reflex the same color as the object passing through.

In addition, the cat’s eyes are reflecting the same color as well.

The object itself was magnified and sharpened in analysis. Considering the object’s path (right to left) and speed, one would expect considerable motion blur in the direction of travel with less motion blur on the top and bottom of the object, but this was not observed. All edges of the object were considerably blurry.

There are few reflective surfaces in the video frame, so spatial confirmation of an object between the camera lens and the cat could not be verified.

Some basic internet research was performed into the visual acuity of cats, under the witness’s assumption that the cat’s eyes were following the object in the video (link provided to the witness: http://www.businessinsider.com/pictures-of-how-cats-see-the-world-2013-10). Cats have some advantages and disadvantages compared to human vision. For example, they see far better in low-light conditions, but they can only clearly see about 20 feet in front of them regardless of the lighting conditions.

In addition, multiple YouTube videos were viewed showing eye shine from cats at night as well to identify some similarities and differences when comparing with the submitted video.

After the initial analysis, the fact that the object was blurred on all edges indicated it could be a very small object which is out of focus. A bug or a dust particle close to the lens could explain its blurry appearance, as well as the blue hue being emitted from reflected light. Since the witness(es) were not able to see the object with their own eyes at the time of the filming, we must conclude that the object was either too small to be seen or the anomaly is some form of artifact. The visual spectrum of the human eye is typically better than a camera’s unless you have modified it for IR or full-spectrum viewing.

Given the fact that the cat’s head moves at the same time the object passes through the frame, it would be more likely that the object is a dust particle. Cat behavior typically involves giving chase to bugs, or at least undivided attention if a bug is nearby and detected. Once the object passes by the screen, the cat does not appear to continue watching a “flight path”, but instead turns its head toward the television seeming uninterested. If this is a dust particle, we must consider whether or not the timing of the cat’s head turning could be coincidental in relationship to the object passing through the frame.

Another possibility considered was a visual artifact. A secondary source was consulted by Nicole Shuck, who has many years of experience in paranormal investigation, as well as photo and video review, specifically of wildlife and hunting footage, as well as cryptozoological investigations. It was her opinion that the artifact was most likely produced by a lens flare from the cat’s eyes reflecting the light from the television. The hue of the TV closely matches the hue of the eye shine, as well as the shades seen on the curtains and the tissue box. Eye shine can be seen from various angles, and if this is a lens flare caused by the eye shine, it would explain the appearance of the cat following an object when really, the cat is causing the anomaly by moving its head, sending a reflection toward the camera lens.

YouTube video search results show a variety of lens flares produced by cats’ eyes in low-light conditions. While some vary in appearance to the submitted video, there are a few which appear similar. Lighting conditions would need to be reproduced exactly to reproduce this effect, and it was suggested that the witness attempt to re-create the scenario with similar conditions to see if the anomaly happens again.

While this clip was definitely interesting, it can be explained best by the lens flare theory. Given that the cat moves his head at the same time the object passes through the frame, it could easily cause this effect on a camera. No paranormal activity was reported, and this appears to be an isolated event.

The next best theory would be a dust particle causing the anomaly, but this would need to include a coincidental movement of the cat’s head to align with the object as it passes through the frame.

While there’s no way to be 100% certain about this conclusion, repeat testing was recommended to re-create the anomaly.

One thing is for certain though; cats’ eyes are stunning to look at in low light!