On May 11, 2018, this case was submitted to The Black Vault. It was assigned to TBV Investigations’ researcher Jeremy Enfinger for analysis.

The photographer submitted the following information:

“This is not a UFO sighting, but I heard you also take possible ghost sightings….

I took these pictures when I visited The Stanley Hotel. The first was taken on the 4th floor, which was an attic 100 years ago where female employees, children, and nannies stayed. I was taking a picture of the guy seated on the chair and then noticed a figure turning the corner when I looked at the photo later. I thought the figure somewhat resembled a woman in an old nanny uniform.

The second photo was taken of the building directly across from The Stanley Hotel. If you look closely, you can see a figure in the window. People have said it looks devilish. I don’t know the history of that building.

Attached (submitted) are 4 photos – the 2 originals, and then the enhanced versions to draw attention to the figures in each one.” 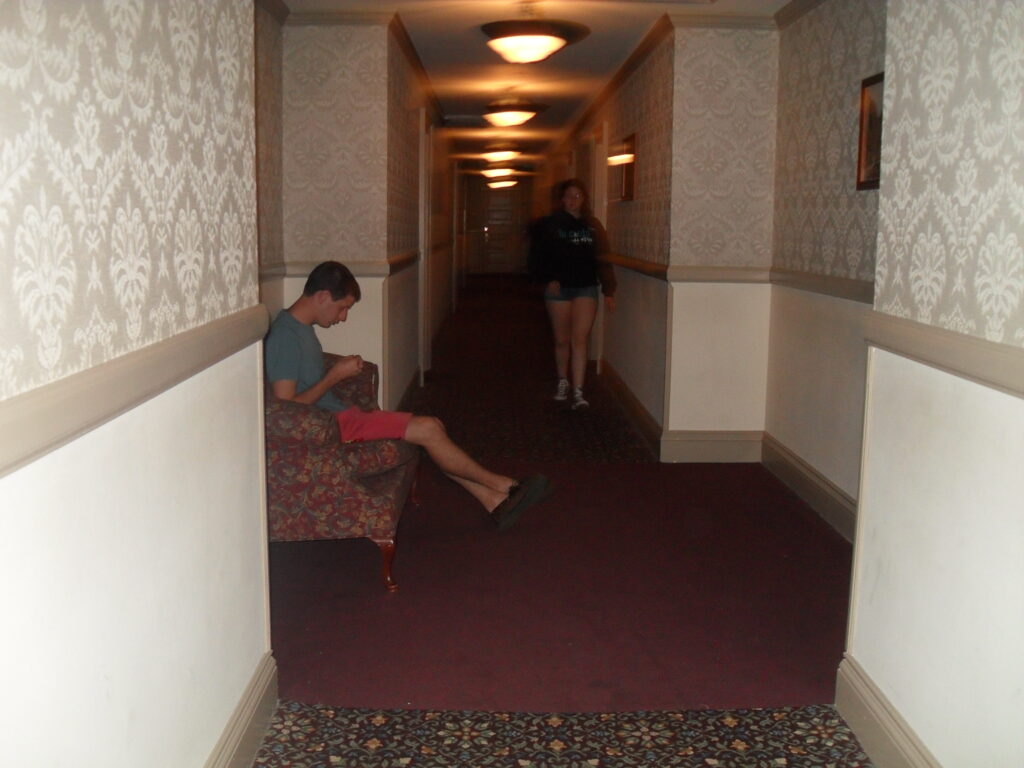 Figure appeared in the window in this photograph.

The figure appeared behind this girl in the photograph.

Witness was attending a grounds tour with a group of approximately 20 guests while there to attend a wedding. The tour was not necessarily focused on the paranormal, but elements of the tour included some of the reported phenomena that reportedly occur there. It also included a history of the hotel, and did not guarantee guests would experience anything paranormal. The room that inspired the writing of the Stephen King novel, the Shining was a part of the tour as well.

She was able to retrieve the camera during the interview and matched the model number verbally with what was noted on the metadata analysis. Images were imported from the SD card to a computer, then sent directly from there to The Black Vault. She stated she did not change the settings on the camera at any time. The files were submitted in order to obtain some feedback about the images.

The photos were not submitted to the Stanley Hotel by the photographer, and permission was given to forward these photos to some colleagues for second and third opinions.

Photo #1 – specific details: This photograph was reportedly taken of the male on the left, who the photographer knows personally. She noted he had “checked out” during the tour, and the woman on the right was, indeed, part of the group taking the tour, though the photographer did not know her personally. She did not believe the camera was in motion during the taking of the photo, but believes the woman had been walking fast to catch up with the group.

The woman in the background was noticed later at night after completion of the tour. The photographer did not remember seeing anyone in the background physically turning the corner. This was reportedly taken on the 4th floor, but the witness wasn’t sure of the exact room number they were nearest. The witness mentioned being told on the tour that this section of the hotel was where children had been kept under the supervision of nannies. She was also able to recall that they were near the reportedly most-haunted room (per the tour).

The photographer’s impression of this photo was that the figure in the background appeared to be female wearing dated clothing, similar to that of a nanny.

Motion blur present in a majority of photo #1.

Photo #2 – specific details: The building and the backdrop prompted this photo, and it was noted that haunted tours included this building. Approximately half an hour elapsed between photo 1 and this photo. The photographer does believe it’s possible this could be a photo of a living person. She indicated family members brought the irregular shape of the figure in the window to her attention, mentioning it had an “eerie” appearance, not being able to see any facial features.

It was mentioned that other tours were going on at the time this was taken, and weddings are scheduled at this location (and may have been going on during her tour), which could explain the vest that appears to be visible. They did not remember seeing any people in the window, however, she admitted they were fairly far away from the building at the time the photo was exposed.

Witness states people who viewed the photo described the figure as having a “demonic” outline. Though she didn’t recognize this at first, she thought the photo had an elongated face with horns after it was pointed out to her.

Metadata analysis indicates the images are the original files, and EXIF metadata was able to be extracted. The image was taken from a Samsung Model SL202 (10 MP) at a resolution of 3648 x 2736 pixels, using automatic exposure control with ISO 200, an exposure time of 1/45 sec and an F-stop of 2.8 and (for photo #2) ISO 100, 1/250 sec and F-stop of 4.0. With the jpeg quality for both images being 88%, there is no indication that the image file has been compressed, though it may have been taken on lower resolutions settings than the maximum for that model. The flash was auto-fired during the first exposure exposure (indoors) and did not fire for photo #2 (outdoors).

The time stamp on the metadata indicates photo #1 was taken 11/21/2009 at 14:04 hours. Photo #2’s metadata indicate the photo was taken the same day at 14:33 hours, which corroborates the witness’s report that both photos were taken on a walking tour of the Stanley hotel and the grounds (estimated approximately 20-30 minutes apart).

Several photo manipulation techniques were employed in attempts to better visualize the anomalies in each photo, including:

Initial impressions of Photo #1: At first glance, I believed the anomaly of interest lied within the shadow of the woman frame right, believing first off that this was simply motion blur. After zooming in, I noticed a figure in the background adjacent to the shadow. My impression was that this was a female walking around the corner, noting a black dress and possibly barefoot. No facial features could be identified. Also of note was the lack of appearance of a shadow projected by this individual on the wall behind them.

Second opinion of Photo #1: Professional Photographer and fellow investigator, Craig Owens was consulted. He pointed out the low quality of this photograph mentioning he would typically reject it right off for this reason alone. Second, he noted the shadow like figure in back could be someone moving in the background. The camera flash does not reach that long a distance, which is evidenced by the blurriness of the overhead lights and the opacity of the woman’s arm closest to the wall (Notice how you can see the wall through it?).

To him, it looked like it could be a short guy, dressed in a dark short sleeve t-shirt and matching shorts down to his knees, walking around the corner of the hallway. He also points out the light reflection in the framed picture to the right of the woman? The reflected light doesn’t even fit in the frame. You also see ghosting of the picture frame itself. This suggests camera movement.

Additional notes include the overhead lights hanging down so low (and at an odd angle) at the far end of the hall… the top rectangle in the door at the far end of the hallway also has an odd appearance. He suspects a possible double exposure. To Craig, it almost looked as though Photo #1 was taken from the other side of a window or plate glass door. That could, in part, explain why the flash range is limited. It might also explain all the crazy distortions including the overhead lights that appear to drop lower and lower.

Third opinion of Photo #1: Fellow paranormal investigator, Nicole Schuck was also consulted. She states “The first one looks like low flash blur setting since she’s quite blurry herself. To me it looks like a guy in the background with modern clothes coming from around the corner and is ducking out from one of the rooms. It’s built like a male with a large torso and smaller arms, he’s got those dreaded long shorts that come down to the mid shin with potential sandals since I see a bare foot of some kind.”

Initial impression of Photo #2: Without context, I am positive someone is in the window frame in this photo. I didn’t necessarily recognize any demonic or malformed appearance, and strived to understand what might be interpreted as “horns” by others viewing the photo, but was unable to derive that possibility myself. I definitely believe the photo is authentic, however I would not lean toward believing this is paranormal. The context of the interview further solidifies my opinion about this photo.

Second opinion on Photo #2 (by Nicole Schuck): Nicole believes the second photo definitely looks like a man in the window with a old fashioned shirt and vest however, it’s possible for this to be a case of pareidolia. She notes he looks like he’s a bit smaller in scale than what he should be. Second, if you look at the tree to the left, you see that the tree’s reflection could be hitting the window and upon closer observation this could be the trees branches (as a possible alternate explanation).

Conclusion: For photo #1, I think it may be up for debate whether we are seeing a male or female person in the background. When I asked for additional opinions about this photo, I did not include the back-story and/or any context. The fact that both people I showed this photo to saw a male in the background was interesting. Comparing that to the photographer’s impression that it was female wearing dated nanny clothing, followed by the tour guide’s description of nannies being on that wing of the hotel could be suggestive. Having seen a female myself, but only after reading the photographer’s account and opinion that she saw a female, could also be suggestive on my part. I’m glad I sought additional opinions for this very reason.

There is enough blur and distortion in the photo to reasonably assume there could be camera motion during the exposure. The lack of shadow produced by the person in the background can easily be explained by the limitation of the flash range and/or if the light sources within the hallway are too dim to allow capturing of a shadow during the exposure.

With all of the post-processing effects attempted, we still do not improve much on the quality of the photo, therefore I cannot deem this to be evidence of anything paranormal. It was most likely another person walking in the background. Even though the witness didn’t necessarily recall anyone walking back there, the fact that the figure was pointed out hours after the exposure was taken would make this difficult to recall with certainty.

For photo #2, I believe this was easier to decide on it not being paranormal. While the figure in the window appears to be wearing a formal shirt and vest, it cannot be ignored that this was taken at a significant distance from the building, and the fact that this is a wedding venue being used the same day requires us to consider this as most likely non-paranormal… at least with the evidence at hand.

As always, I welcome any additional feedback and/or analysis to further consider information not included here.