On October 22, 2016, this case was submitted to The Black Vault.  The photographer, submitted the following information:

“This picture was taken by my wife with a digital camera and tells me there was nobody around or behind when the photo was taken. She was also sat with 3 other people facing me that says the same.

I showed this pic to the hotel a few weeks after and they tell me of ghost activity in the hotel. I had the pic examined by a photographer that also says a ghost. I’m the one in the middle.

It was taken at the Holiday Inn, Leicester, built over a Roman garrison

Have any ideas on this?”

The case was turned over to TBV Investigations team member Jeremy Enfinger for analysis, who specializes in claims of ghost activity.

Metadata analysis indicates the image is the original file, however, EXIF metadata was not able to be extracted. The image was taken from a Samsung Model DV300, DV300F, or DV305F at the model’s maximum resolution of 4608 x 3456 pixels, using automatic exposure control with ISO 400, an exposure time of 1/8 sec and an F-stop of 2.5. With the jpeg quality being 94%, there is no indication that the image file has been compressed. The flash was fired during this exposure as well.

The time stamp on the metadata differs from the approximate date reported. According to the individual submitting the photo, it was taken around Christmas, 2015. The metadata indicates it was taken February 15, 2012 at 2:36 p.m. It should be noted, however, that if the camera owner did not set the time/date in the camera settings prior to this exposure, the metadata would not necessarily display accurate “modify date” information. It should also be noted that presence of Christmas decorations in the photo corroborates the individual’s report.

After writing the initial report, on January 20, 2018, TBV Investigations team member Jeremy Enfinger conducted an interview with Shaun, the man who submitted the photograph.  He will be sending the actual camera to TBV Investigations for further testing, with hopes to try and reproduce the image using a multitude of settings and lighting situations, attempting to emulate the original setting.

Testing will be posted once it is completed. 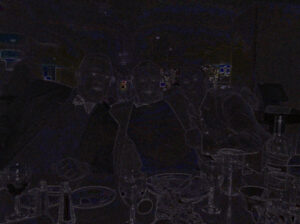 Aside from the Christmas decorations previously mentioned, ELA (error level analysis) shows similarities in texture of the anomaly with the background and close resemblance to some of the articles of clothing in the foreground. This similarity in texture implies there was no digital alteration of the photo in the area of interest around and including the anomaly. There is also stark contrast between the anomaly and light sources from within the field of view, and it blocks the light from the lamp (frame left), indicating the anomaly has mass and opacity through the clearly-visualized portions.

No notable indications of time/date found within the photograph. There’s a bottle of Whispering Hills Californian Chardonnay which began bottling in 2010, but no year is visible in the photo.

While the two men in the foreground (middle and left) have minimal red-eye effect from the flash, the man on right has moderate red-eye in the photo indicating his pupils were pointed directly toward the flash compared to the other two men in the foreground. The amount of red-eye for the anomaly is severe and more easily notable at a glance. This is inconsistent with the red-eye pattern of the men, and would typically indicate the subject would either be closer to the flash or looking more directly at the flash, neither of which seems to be the case give the direction it seems to be facing and physical location in the room, leaving some question about how this was accomplished. However, when examining the reflection of the flash in each of the subjects’ eyes, the angle of reflection is consistent with the men in the foreground and the anomaly, suggesting physical presence during the flash consistent with the angle/location of the photographer.

The anomaly does not possess the same RGB color values, and this section of the image appears to be desaturated compared to the rest of the photo, though some color is present. There is motion blur in a horizontal pattern surrounding the anomaly, but clear facial features are seen within the anomaly without motion. Initial observation was to suspect digital manipulation, but metadata contradicts this suspicion. It is possible to manipulate the metadata, but it would need to be intentionally done and knowledge of how to do this is not common.

Light reflection patterns are consistent in the anomaly compared to that of subjects in the foreground, however, there are shadows present at the edges of the anomaly that are not present with subjects in the foreground, indicating a discrepancy in how the room light interacts with the anomaly. Parts of the anatomy cannot be seen posterior to the facial anatomy, and appear transparent where the background is clearly visualized where anatomical features should be seen.

At first glance, my opinion was that this photo visibly appears to be digitally edited, however, there is evidence to suggest that the anomalous figure was in the room during the exposure. If it was hoaxed, someone would have had to go through great lengths to modify the metadata on the original image following photomanipulation, which generally would show on the ELA analysis and/or reduce the quality post-compression. Or someone found a way to take a photograph of a doctored photo/sample, which would possess accurate metadata, though I found no evidence of this.

Additionally, it’s possible that someone may have walked into the frame during exposure. With a 1/8 second exposure, a blur effect might be possible depending on how fast that person would be walking, but the blur should be consistent throughout the image of that person, not only in certain areas. It would also not explain the desaturation in color of the anomaly.

I would recommend further testing of the camera to include the features “split shot”, “motion photo” and “artistic brush”. It is possible the effects appreciated may have been added by mistake. I was not able to test this model of camera myself.

Given the red-eye appearance, the desaturation of the anomaly, the blurred edges (and clear facial features), the resemblance to Photoshop’s clone tool effect, and shadow discrepancies, there are enough indications to suspect some level of alteration. The problem is I can’t seem to find any evidence of manipulation given the data available. It is my opinion that this photo is authentic, however, I am unable to explain the anomaly or its features.

Currently, the photograph is with other photo analysts for evaluation, and results will be posted. 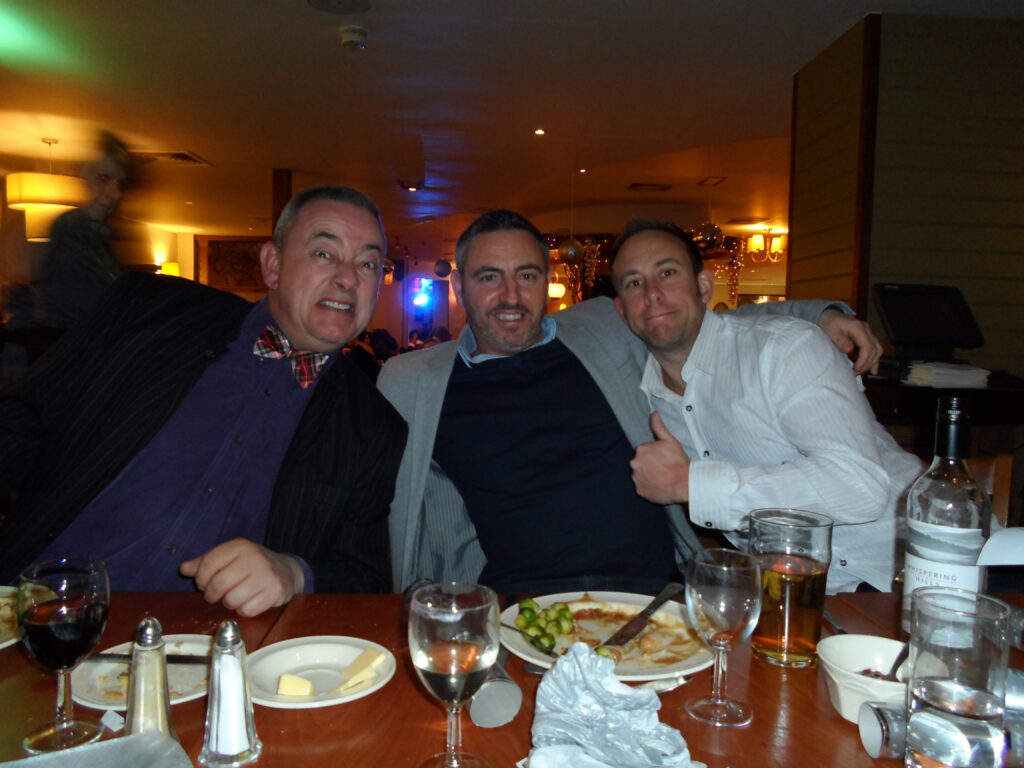 Research image analyst Kenn Raymond, owner of VDI Spectral Art, decided to do his own independent analysis on the photograph above.  We were very intrigued by Kenn’s findings, because after extensive analysis, Kenn concluded the image to be an unknown, but did find a possible clue (as of 5/17/18 is still being researched) that shows the metadata lists the “number of images” as 2, indicating a possible double exposure.

Additional details will be added, when available.

Some visitors to The Black Vault are now submitting what they believe, are examples of this photo being replicated.

Below, you will find a few. Did they solve this case for you? Or does this prove the exact effect is still not achieved? Post your comments below.

Al Jacinto II on The Black Vault Fan Page on Facebook, posted the following photographs as “proof” that the image in question, is not a ghost (Image captions are quotes from Mr. Jacinto):

It should be pointed out that another comment made by Al Jacinto II stated:

In other words – the agenda would simply be to debunk, and not offer a truly unbiased test to reproduce the result.

Reddit user extremesalmon submitted the following photograph, after seeing the above case: