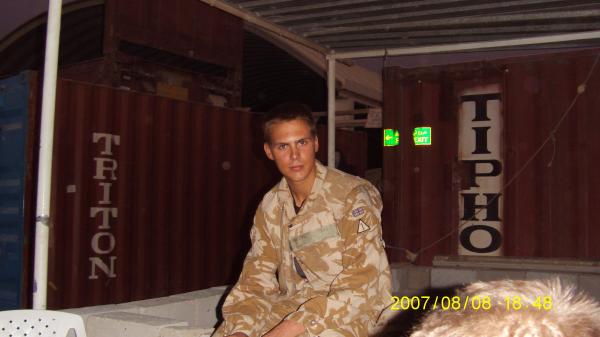 By John Greenewald on March 7, 2015 0 Comments
Photo of Ghost or Evil Spirit taken while serving in Iraq

The following was submitted anonymously to The Black Vault:

This image was taken on 8th August 2007 in the COB (Central Operating Base) which I believe used to be Basra Airport, it’s located south west of Basra itself, over the river. I was serving in Operation Telic 10, 2nd Royal Tank Regiment, attached to the Irish Guard Battle Group.

I had just returned to the COB from a 3 month stay in Basra Palace where 3 friends had been killed within weeks of each other. This was taken the day I got back, in the COBs smoking area. When I returned home in November, I uploaded all the the photos I had taken to Facebook and started tagging people, I noticed a figure behind my friend and zoomed in closer in order to work out who it was so I could tag them. It was then I noticed it resembled death and wasn’t a person at all. I changed the brightness of the photo and got the shock of my life!

Firstly the situation at the time was so hostile that anyone wearing anything other than the issued uniform was immediatly noticed and challenged! With the security in our camp noone could have got in. If the figure was seen in person by myself and friends, it would of got several 9mm rounds to the head, however at the time, nothing was seen.