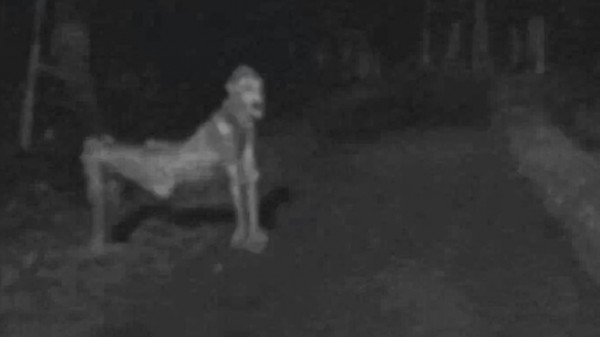 This case file has now been labeled a hoax, as the photo was from a 1980’s film known as Xtro.

A Facebook picture circulating Thursday has a lot of people up there worried. The post was shared thousands of times within a few hours and had a lot of people uttering the word skinwalker, a well-known legend in Indian country.

The picture shows an unexplained being lurking on the side of a road.

The person who posted it claimed it was taken near Lybrook and Counselor, which is near the Jicarilla reservation.

The story claims that a geologist was working in an oil field in the area and saw something odd and decided to take a heat signature of it. The next day, the geologist suddenly quit.

The story spread like wildfire with people on social media saying, “seriously freaking out,” “yikes … I’m driving through there tomorrow,” and “skinwalker!”

Skinwalker refers to a Native American legend which was brought to life by author Tony Hillerman.

According to the legend, a skinwalker is a person with the supernatural ability to turn into any animal and walks on all fours.

There are stories of countless encounters, but few will speak of them, too scared they will be targeted again.

Many people who posted and shared the picture Thursday said they found their posts and comments disappear. People who emailed it to others said they were unable to retrieve it.

But everyone can rest easy. It didn’t take long for the picture and story to be debunked.

It apparently comes from a 1980s science fiction move “Xtro,” where a creepy being is born, then goes on the prowl and is spotted by a couple driving along the road.

It’s unclear how the story was connected to Lybrook or Counselor, or that so-called geologist. Perhaps it was just someone having a little fun, but it shows the power of social media and legends.

The New Mexican who posted the image Thursday has since taken it down, saying she shared it because others had. She says she has no information about its origin.

Source and special thanks: KRQE News