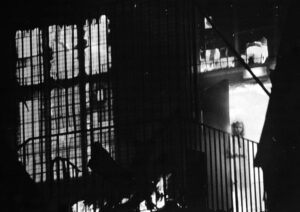 The following is published by About.com regarding the history of this photo:

On November 19, 1995, Wem Town Hall in Shropshire, England burned to the ground. Many spectators gathered to watch the old building, built in 1905, as it was being consumed by the flames. Tony O’Rahilly, a local resident, was one of those onlookers and took photos of the spectacle with a 200mm telephoto lens from across the street. One of those photos shows what looks like a small, partially transparent girl standing in the doorway.

Nether O’Rahilly nor any of the other onlookers or firefighters recalled seeing the girl there.

O’Rahilly submitted the photo to the Association for the Scientific Study of Anomalous Phenomena which, in turn, presented it for analysis to Dr. Vernon Harrison, a photographic expert and former president of the Royal Photographic Society. Harrison carefully examined both the print and the original negative, and concluded that it was genuine. “The negative is a straightforward piece of black-and-white work and shows no sign of having been tampered with,” Harrison said.But who is the little girl?

Wem, a quiet market town in northern Shropshire, had been ravaged by fire in the past. In 1677, historical records note, a fire destroyed many of the town’s old timber houses. A young girl named Jane Churm, the legends say, accidentally set fire to a thatched roof with a candle. Many believed her ghost haunted the area and had been seen on a few other occasions.

The mystery could be solved. On October 11, 2013, the Shropshire Star published the following article, disputing the authenticity of the photo:

One of Shropshire’s most sensational mysteries – the spooky riddle of “The Wem ghost” – may at last have been solved by eagle-eyed Shropshire Star reader Brian Lear.

Brian spotted an eerie similarity between a girl standing in the street in a 1922 photo of Wem and the young girl whose fuzzy image was famously captured amid the flames as Wem Town Hall burned down in 1995.

That photograph taken by local amateur photographer Tony O’Rahilly created international headlines and sparked the legend of “The Wem Ghost”.

There was speculation that the girl was 14-year-old Jane Churm, who accidentally started the disastrous great fire of Wem in 1677 and was reputed to be haunting the town hall.

Wem folk enthusiastically embraced the story which put their town under the spotlight. A sign on the outskirts had a makeshift alteration to read “Ghost Town”, experts in paranormal activity visited, and there was even a scroll and a plaque to mark where the ghost was spotted.

But when Brian, from Shrewsbury, looked at a photo of Wem — a postcard franked in 1922 — in our Pictures From The Past slot the other day, his eye was drawn to a little girl standing in a doorway.

“I was intrigued to find that she bore a striking likeness to the little girl featured as the ‘Wem ghost’,” he said.

“Her dress and headgear appear to be identical.”

So we have blown up detail from that picture to compare with the “Wem ghost”. And, by jove, he’s right!

Look at the pictures and make your own minds up.

Photographer Tony O’Rahilly, who died in 2005, said at the time that he had discovered the ghost image when developing his snaps of the town hall fire.

Some time later the photo was examined by experts from the National Museum of Photography, who concluded it was a fake. But others were certain it was genuine.