Witness submitted the following case to The Black Vault / TBV Investigations on 09/09/2018 at 3:08 pm PST. The case was assigned to TBV Investigator Jim Kerr for investigation and analysis.

Witness Webster submitted the following testimony on 09/09/2018 which is unedited and appears as it was submitted:

“As usual I was photographing The classified cabal planes I had been very hard and asking the aliens telepathically if they existed to show themselves as I was photographing one of their menacing green planes this thing decided it wanted to be the main attraction it winked on out of nowhere as the video shows and just as quickly it winked out. I have photographed many strange things this is the only one that I am absolutely sure is alien No Doubt and when I expand it I am sure I see some kind of humanoids in it but I would like other people to verify that but I’m sure that I see them I’m going to send the picture and the video so you can expand picture see if you see humanoids this is one of the only sightings to affect me emotionally.”

Additional Witness Testimony submitted on 11/15/2018 at 6:58 pm PST. This statement is in reference to submitted evidence # 3.

The witness submitted five files of visual evidence, two jpg photos, and three mp4 video clips. The visual evidence is numbered in the order it was received. 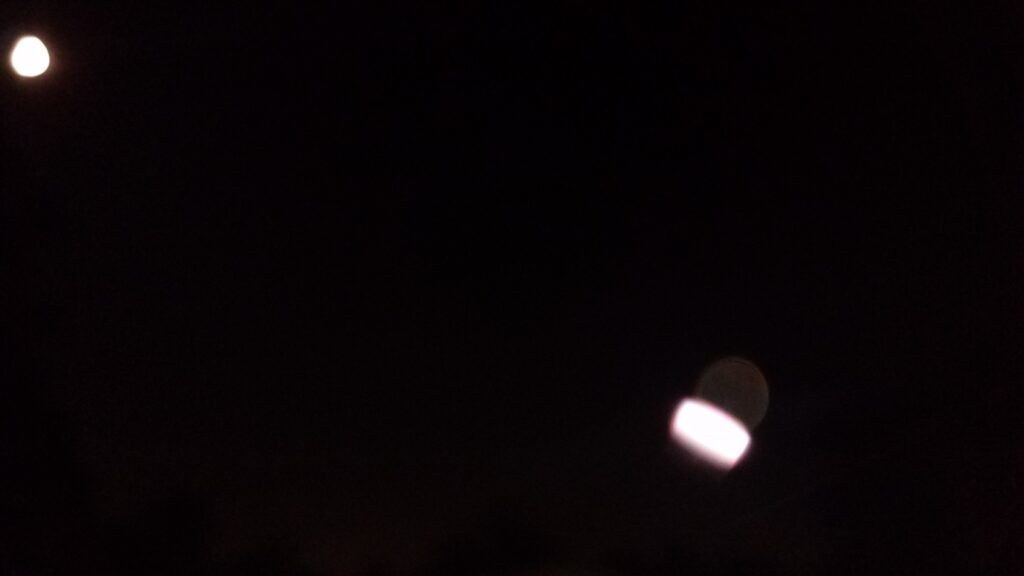 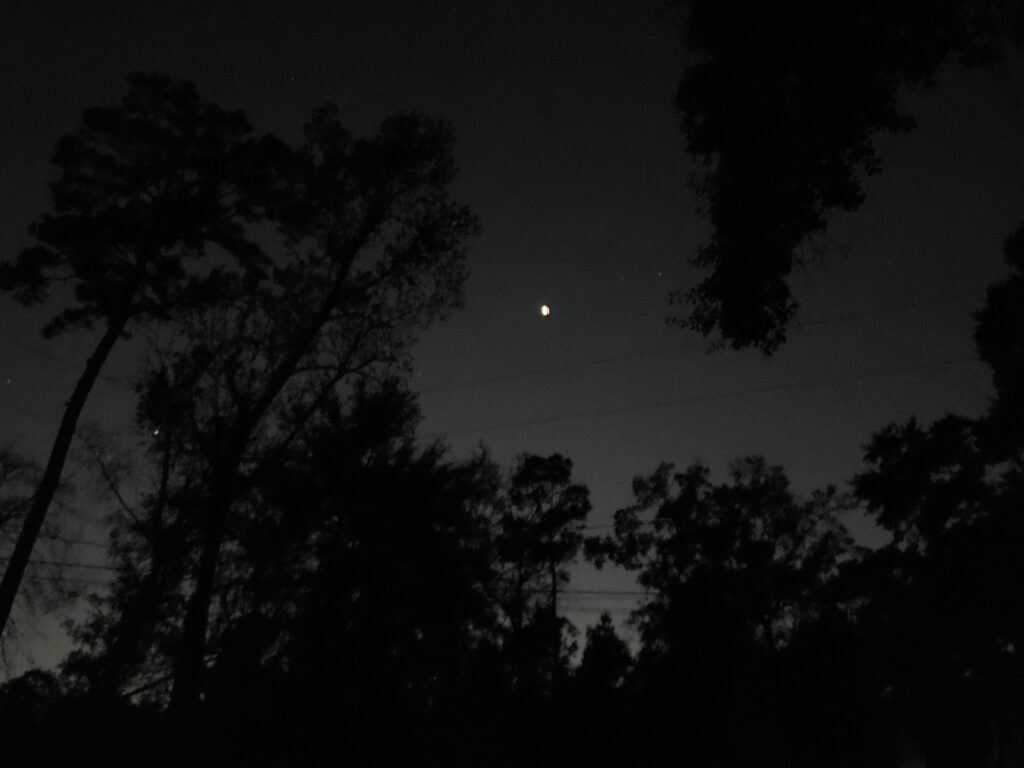 As an amateur astronomer, photographer and videographer I have spent many years observing celestial objects in the night sky. I have experience with astrophotography along with coupling DSLR cameras and video cameras to telescopes using eyepiece projection to film celestial objects. I am familiar with camera focus issues in low light, lens flares caused by the sun, moon, and artificial light sources. To recognize out of focus celestial objects, I and have intentionally observed and filmed celestial objects that are out of focus. I am very familiar with aircraft flying both at night and during the day. I am familiar with aircraft landing lights and marker lights. From 2011 to 2015 I investigated claims of geoengineering taking place in our skies including claims of aerosols, aka Chemtrails, being released/sprayed by jet aircraft. As a result of my geoengineering investigations, I have over 100 hours of archived video taken of jet aircraft during the day and at night.

I attempted to contact the witness numerous times since 11/15/2018 as I had a list of questions regarding his statements and the submitted visual evidence. The witness never replied to my questions but based on the visual evidence alone I can identify the objects and video/photo anomalies bringing this investigation to a conclusion.

The witness stated, in essence, he was photographing classified cabal planes and asking the aliens to reveal themselves. He then videoed what he described as their menacing green plane, and the aliens decided to show themselves appearing out of nowhere then immediately vanishing.

Let me explain what the witness is referring to when he states cabal planes, menacing green planes, and his belief they are aliens. Back in 2011 I investigated this subject and am very familiar with these beliefs. There is a small sect of people who firmly believe aliens are piloting flying saucers disguised as jet aircraft and are spray toxic chemicals (aka chemtrails) in the earth’s atmosphere. They believe these so-called chem jets; cabal planes are holograms projected by alien flying saucers to conceal their diabolical plan to terraform the planet to sustain alien life. If one searches YouTube or an internet search, there are thousands of examples of this cult-like belief system. At best, this belief would make a poor “B” rated Hollywood movie.

Searching the archives of Stellarium, (a planetarium software that shows exactly what you see when you look up at the stars), I was able to view exactly what celestial objects were visible to the witness in his night sky from his location in Porter, TX on 08/23/2018 at 9:00 pm. The moon phase was a waxing gibbous illuminated at 93% that would account for the lens flares in one of the witness’ photos.

Refer to photos and video 1-5 under the evidence heading.

#1, jpg photo. Keep in mind the witness never responded to my questions, but the picture and video are self-explanatory rendering my conclusions. In the top left portion of this photo is an overexposed photo of the moon. The shape of the overexposed moon matches the waxing gibbous moon, 93% illuminated on the night of 08/23/2018 at 9:00 pm. In the lower right portion of the photo are two lens flares. Based on my experience these are lens flares are common when photographing an illuminated moon.

#2, three-second mp4 video clip. This video clip shows nothing but lens flares from an external light source, most likely a red laser pointer or flashlight with a red lens. It is obvious that the video recording device was mounted on a tripod or sitting on a stationary object. It is also obvious that someone was manipulating a laser or flashlight in an up and down motion directed in the vicinity of the camera lens to cause the lens flares captured by the camera. It’s also important to note while taking video at night, the shutter speed of the cameras will be slowed down using automatic settings. This slow shutter speed is the reason we see the squiggly red lens flare dancing around in this video footage. In my professional opinion, this was done intentionally to bring about deception.

#3, three-second mp4 video clip. As an amateur astronomer, I can state exactly what is depicted in this video clip. I can not state the name of the star, but it is, in fact, a star. It is obvious to me that the witness pointed his camera on a bright star the rotated the camera in a clockwise circular motion that gave the star the false illusion that it was moving. Also, due to the motion of the camera, the star went in and out of focus. Again, in my professional opinion, this was done intentionally to bring about deception.

#4, jpg photo. Photo of a jet aircraft with it’s landing lights turned on. The witness stated he was photographing aircraft or what he termed as a cabal plane.

Based on my years of experience filming the sky as an amateur astronomer, photographer/ videographer, along with my knowledge of cameras, I can recognize deceptive manipulation in visual evidence submitted by a witness. There was no need for this witness to answer my questions. Answering questions would only be additional evidence of a hoax. I believe the witness intentionally submitted this hoax for reasons known only by him. I don’t even believe the witness believes his implications that these jet aircraft are alien flying saucers in disguise. While I find these fake UFO reports frustrating, I am glad the witness submitted this hoax to TBV Investigations. There is a valuable benefit to these fake UFO reports. Investigations like this can be a benefit to other investigators and valuable archival reference data for future investigations.

My conclusion: Camera manipulation using an artificial light source (flashlight or laser pointer) at night with a slow camera shutter speed to create squiggly lens flares in video footage. Overexposed moon photo with lens flares. Intentional camera manipulation rendering an out of focus star to fake a UFO. And to top it off, an IMPLIED TALL-TALE of alien flying saucers disguising themselves as jet aircraft spraying toxic chemicals in our atmosphere to terraform the planet and take over the earth. Now that’s what I call a WHOPPER…