Massive Unidentified Sea Creature Washes Up on Beach in Indonesia

The following was written by The Telegraph. It is archived here for reference and research purposes, and all copyrights are help by their respective owners.

By Our Foreign Staff

A giant carcass found washed up on a beach in Indonesia’s central Maluku province puzzled locals and authorities trying to identify the massive creature.

The massive carcass was found on Hulung Beach on Serum Island on Tuesday night by a local man, the Jakarta Globe reported.

Asrul Tuanakota, 37, said that he initially mistook the huge fleshy blob for a stranded boat, the newspaper reported.

Locals first shared images of the carcass, measuring about 15 metres (50ft) in length, on Wednesday. The animal  is believed to have been dead for at least three days before being discovered.

According to local reports, fishermen thought it to be a giant squid, but a coordinator of Indonesia’s Marine and Coastal Resources Management said it was likely to be a whale. Lab tests are underway to confirm the species. 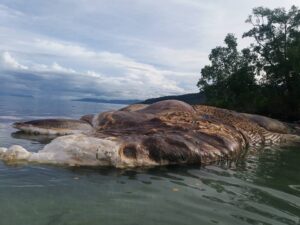