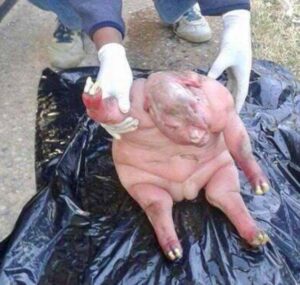 The Black Vault maintains no official stance on cases like this. It was added here in the Cryptozoology section as a new case for investigation.  Although it is largely thought to be simply a deformed lamb born by a sheep, infected by the Rift Valley Fever, however others maintain an explanation much more paranormal.

This story was originally published by The Daily Mail.  All copyrights on the material are reserved by their respective owners. This material is used here for reference purposes.

Have some thoughts? Publish your comments below.

Mutton dressed as man: Superstitious villagers living in fear after sheep gives birth to ‘half-human half-beast’ creature that was ‘sent by the devil’

By Jamie Pyatt In Cape Town For Mailonline

Superstitious villagers have been living in fear since a sheep gave birth to this creature that was said by elders to be half-human half-beast and ‘sent by the devil’.

Many of the 4,000 residents and farmers of Lady Frere in Eastern Province, South Africa, were convinced that bestiality and witchcraft had led to the birth of the creature.

The panic got so great that the Eastern Cape Department of Rural Development sent out experts to carry out tests after pictures of it spread like wildfire through the community.

Chief Director of Veterinary Services Dr Lubabalo Mrwebi admitted that at first glance the lamb which was born dead did resemble a human being but was not part human.

Dr Mrwebi said: ‘We can confirm this not a hoax photo but that the severely deformed lamb was born by a sheep in Lady Frere this week which at a glance resembles a human form.

‘It is not however human but a deformed stillborn lamb sired by a sheep and was subsequently infected by a Rift Valley Fever at an early stage of its pregnancy.

‘It is worth noting that a sheep has 28 pairs of chromosomes while humans have 23 pairs which is important in dispelling the myth that a union of a sheep ovum and a human sperm can lead to a development of a viable life form.

‘The deformed lamb exhibits signs that are consistent with an early foetal development that went wrong as a result of a viral infection and nothing more’ he said.

Many of the 4,000 residents and farmers of Lady Frere in Eastern Province, South Africa , were convinced that bestiality and witchcraft had led to the birth of the creature

Dr Mrwebi said that the gestation period for a sheep is five months, and that meant that the particular sheep was conceived in late December 2016 or early January 2017.

He said it was a time of plentiful rainfall which brings with it many mosquitoes and midges which are carriers of viruses that cause the Rift Valley Fever in sheep.

Dr Mrwebi concluded: ‘It is fair to assume, therefore, that the sheep was infected by the RVF virus.

‘The resultant circulation of the virus in the blood found its way through the maternal blood into the uterus and the foetus, which was at a very critical stage of development.

‘The infected foetus then, as a result, failed to form properly, leading to the deformity that it became. It does look like a human form but it is not part human at all’ he said.

The department’s veterinary officials is conducting a post-mortem and its results will be communicated to the public who are fearful in the remote area that witchcraft is at play.

A villager was quoted as saying: ‘The elders when they saw it said it was sent by the devil and was born after a coupling between a man and a sheep and then there was panic.

‘Many people are afraid and will not be happy until it is burned’ he said.

The “Montauk Monster” was an animal carcass, thought to be a raccoon, that washed ashore on a beach near the business district of Montauk, New York in July 2008.

The identity of the creature and the veracity of stories surrounding it have been the subject of controversy and speculation.

It is not known what happened to the carcass; it was said to have mysteriously disappeared.

Although not a match, there are similarities between the “Montauk Monster” and this unidentified creature.  Many believe the Montauk Monster to be a deformed raccoon, while others believe it is a product of experimentation by the U.S. Government.

The photograph is added here for reference:

This photograph of the creature’s carcass appeared in July 2008, quickly circulating through local papers and the Internet.