Thomas Costello was allegedly a security officer that worked at the infamous “Dulce Base” in northern New Mexico. The Dulce Base is allegedly a secret alien underground facility under Archuleta Mesa on the Colorado-New Mexico border near the town of Dulce, New Mexico.

Multiple online sources and viral posts, have circulated this photograph as having been leaked by Costello, then shortly after it was leaking, he and his family went missing.  There is no evidence that I have found, that shows that Thomas Costello even exists. Further damning evidence is that this photo which has circulated hundreds of thousands of times online, is, in fact, a verifiable hoax.

Here is an example of one of the many viral posts that are circulating:

The problem when investigating this, is the fact that this is identical to scenes from the moving The 6th Day, starring Arnold Schwarzenegger.  Here is some background to the movie, courtesy of Wikipedia: 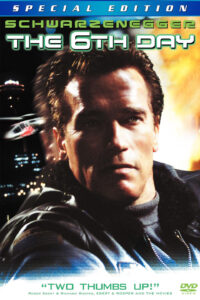 The 6th Day is a 2000 American science fiction action film directed by Roger Spottiswoode and starring Arnold Schwarzenegger as Adam Gibson, a family man of the future who has been illegally cloned as part of a vast conspiracy involving a shady billionaire businessman. Schwarzenegger received a salary of $25 million for his role in the film.

The film opened at #4 in North America and made $13 million in its opening weekend. It became a box office disappointment and received mixed reviews from critics. The supporting cast features Robert Duvall as the scientific genius who developed the cloning, Michael Rapaport as the requisite best friend, Sarah Wynter as an assassin, and Wendy Crewson as Gibson’s wife. The film was also Terry Crews’ film debut, portraying a police thug.

To verify, I found a copy of the blu-ray version, and made the following screen shots:

You can see that the position of the bodies, inside the chamber, are a match.

This can easily be labeled, a hoax.