By John Greenewald on September 4, 2015 0 Comments


This case surfaced a few weeks ago, and recently (as of the first week of September) has become viral. The video shows multiple photographs on a “humanoid” type object seen from various locations over Los Angeles, California. This video was submitted to The Black Vault, with the following letter:

Best evidence we have seen and captured yet of the humanoid shaped anamolies that we have been seeing as it was captured on 3 cameras with dozens of eyewitnises to attest to seeing this object while at the free Public event.

The video itself was published online via YouTube, with the following caption (I left this unedited):

this Humanoid UFO was Captured by 3 different cameras at an la ufo channel event with dozens of eyewitnesses to attest to the authenticity of this sighting. in all 3 videos you see the same sequence as the ufo was recorded at the same time but through the different angle and quality of each camera you can desern that it wasnt a hoax or sgi but indeed a humanoid sky anomoly that appeared to everyone at sequoia park that day. People can be heard in shock in the backround of the video if you look at the raw footage linked bellow of these 3 raw videos of the same object. it appeares to have seperations in its space suit and a visor that you can see in his or hers face which makes you wonder if it indeed is a humanoid being inside of it.

The following interview was submitted to The Black Vault for inclusion on this case file. Although I have posted my reasonable and probable explanation below, I wanted to include this in the interest of fairness to show all information available.

This is the first analysis video I’ve done of our footage from the research group. This Humanoid UFP was captured in Sequoia Park In Monterey Park in Southern California August 9th 2015 around 4:oopm. I was one of 3 reasearchers in LA UFO CHANNEL that captured this anomaly. I did this video to debunk the debunkers regarding the humanoid ufo. You will see the footage with different filters at digital zoom and Stabilization to see different aspects of the same footage. I also go through the conspiracy theory of Project Blue Beam and the like. I explain how we spotted and captured this footage and the strange synchronicity of having just seen our fellow researcher Jim Martin’s humanoid footage caught nearly 2 years earlier. I hope that the video can answer peoples question as well as help the subject matter of UFO’s to be taken more seriously and in a scientific manner. We pride ourselves on trying to bring out evidence that has gone through the test of debunking and consideration of all other possibilities before we post footage. 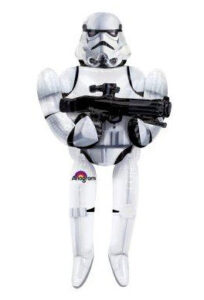 When I first saw this case, I did not think much of it other than a balloon shaped like a Star Wars Stormtrooper. After searching around a bit, a likely candidate is what you see here.

I mean no disrespect to those who are investigating this video.  However, I think when you see something like this, in the distance, there are very likely explanations for it. And when you see things like this, for example, a balloon that looks nearly identical to the object – it needs to be entertained.

When dealing with UFOs, I am a fan of Occam’s Razor. And in this case, I think the simplest answer is the correct one.

(P.S. Want to buy the balloon? CLICK HERE for the source)