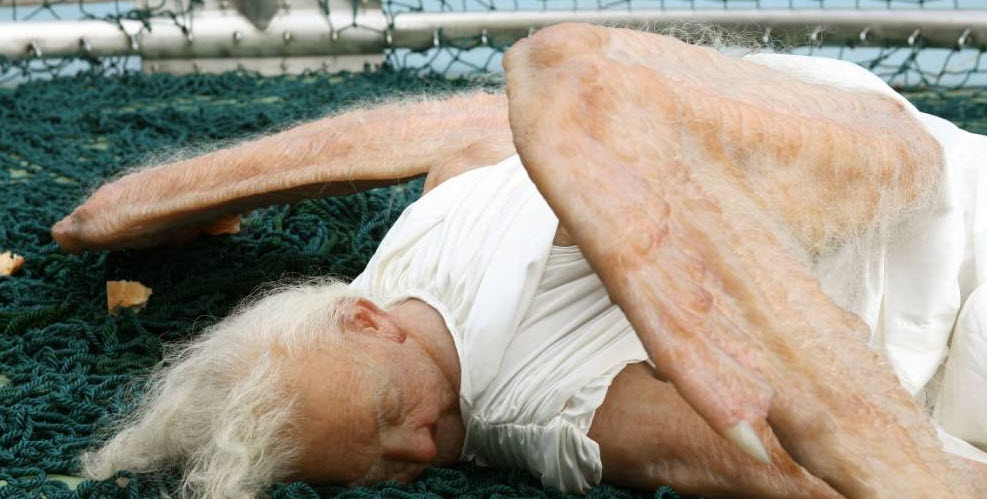 Social networks have been blowing up with the news story of a “fallen angel” over the skies of London.  Pictures also come along with the story, and are fairly disturbing to look at.

More and more headlines are circulating that this is a “legitimate” story.  A very quick search, proves this is simply a hoax, and should not be forwarded around.  The photos are of an art exhibit.  Recently, the Daily Mail wrote about the artist in this July 24, 2015, story:

Art lovers were shocked by a ‘fallen angel’ installation that was unveiled in Beijing this week.

The pair are known for blurring the lines between art and reality by using materials such as human body fat in their work.

Here is one such ‘hoax’ story that is widely circulated, with well over 15,000 Facebook likes and shares (Source: ZON News):

BREAKING NEWS: Real Life Fallen Angel Has Fallen From The Sky In London

A human like “Angel” has fallen out of the skies over London. The extremely human like creature with what seems to be “angel” wings as arms appears to have fallen from the sky at around 1:50pm this afternoon.

The ‘Angel’ like creature was quickly rushed away by what seemed to be undercover police officers dressed in suits and sunglasses, resembling the characters in the hit movie Men in Black.

It comes just hours before NASA announced finding ‘Earth 2.0′ the most habitable planet ever discovered.

All a little freaky if you ask me.