Analysis of a Web-Like Substance Encountered October 14, 2005 and October 17, 2005 in Northeastern Colorado

A massive amount web-like material was observed covering a large area in northeastern Colorado farm country on October 14, 2005 and October 17, 2005. Following are exerpts, with slight modifications, from William Phillip’s (the witness) letter of 11/16/2006.

“On October 14th, I was traveling in Northeastern Colorado on my way to Holyoke, CO. It was between 9:00 PM and 10:00 PM. As I recall the sky was a little overcast and a slight breeze. I had driven Northeast on I76 from Denver to the Sterling, CO exit. I took US Hwy 6 East towards Holyoke, which is about 50 miles East. Not long after I headed East on Hwy 6 I began to see something floating across the headlights. I couldn’t tell what it was but at times it looked wider than the front of the truck. At first I thought it may be cornhusks or something blowing off a truck in front of me, but there were no trucks in sight. I kept seeing this in differing lengths until I reached Phillips County Rd 29, which I turned onto and headed South.

On Rd 29 I kept seeing the same thing only now I was going much slower and the strands were longer. I stopped to see what this was and directly in front of the truck in headlights was a very long strand of web material with clumps of white stuff on it. When I looked to see where it came from it was hanging from a power line and stretched clear across the road. As I looked at the power line I could clearly see many other strands hanging from the lines. Then I noticed it on the fences and weeds. The antenna and grill of the truck was covered with the stuff.

I continued South on Rd 29 for 10 miles to County road 6 where I reached my destination. All along the way I saw the webs across the road and hanging from things.

The next morning I drove back down Rd 29 for about 2 miles and saw the webs all over the fences and weeds.

I did not notice anything other than the webs that night such as strange lights, or lots of insects in the air. The only other thing was a low flying, maybe a couple hundred feet, small single engine airplane flew over head about 10:30 or 11:00 PM. I thought that was unusual for the area as I had never heard a plane at night out there in the middle of nowhere before. I went outside to look as it passed overhead but could not see the plane or any marker lights on it. Following are some photographs of the October 14th encounter.” (All on-site photographs by William Phillips) 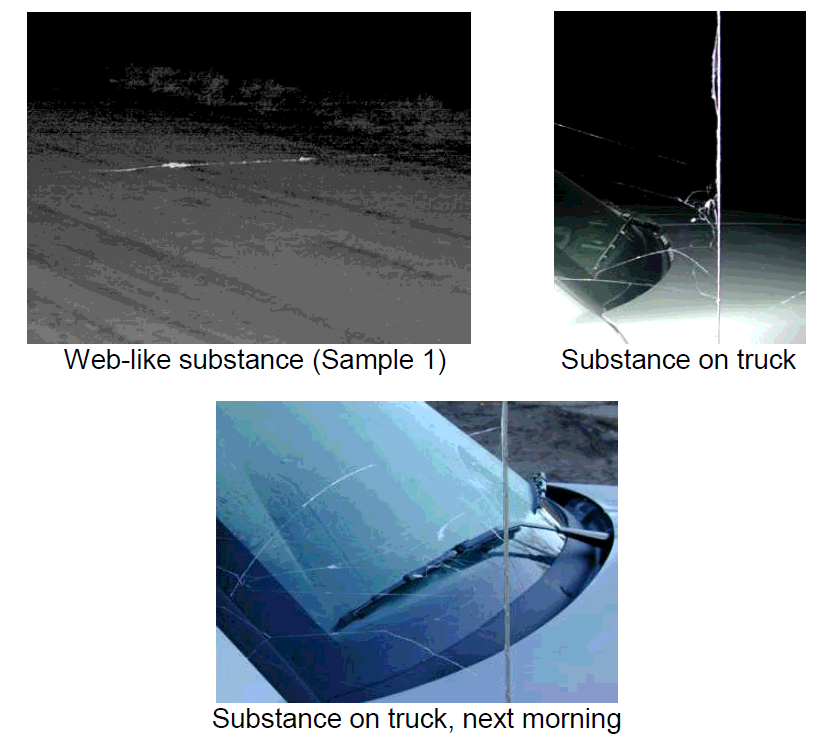 “The following Monday morning, October 17, from about 7:30 to 11:30 on a very clear, calm and warm day with very blue skies I noticed a lot of jet planes, I assume airliners, flying overhead with the contrails that do not dissipate behind them. This was unusual, as I had seldom seen jets over this area and never in such numbers. They were everywhere. In the four weeks since then I have not seen this again.

Then about 2:30 or 3:00 in the afternoon I was sitting down looking up at the sky to the West with the sun blocked from direct view and I began to notice webs, some at least 30 feet long, floating down out of the sky. The amount that I saw was not near the volume that had to have fallen on Friday night, assuming they are the same, but was still noticeably falling for about 30 minutes or so.

There were no birds or insects, or anything else of notice, flying around that I could see. Again these webs had clumps of something on them but appeared more hair like than the webs from Friday night. Those clumps seemed to be more concentrated or ball like.” Following is a photograph of the October 17, 2006 encounter.

1) The web-like material in sample 1 (October 14, 2005) appears primarily as bundles of fine strands combined in rope-like fashion. Some single fine strands are also observed. These bundles are identified as a polymer containing secondary protein amide linkages typical of a protein structure. The strands have very fine droplets adhering to the surface, which is probably indicative of a natural ester. The ester material is most likely responsible for the adhesive properties of the sample. This indicates a biological source is involved in its manufacture. However, at this point the specific source remains unidentified. The spectral data are close to that of silk made by spiders and caterpillars.

2) Sample 2 (October 17, 2005) is similar in appearance to sample 1. However, it is composed of at least two components. There is the same protein type strands identified in sample 1. In addition, some silicate mineral (dirt) is present. This component is probably contamination picked up by the adhesive material on the surface of the sample. Note in the above photograph the substance was in contact with the dirt and debris on the ground.

3) The protein fibrous material compares to that from “angel hair” falls in Los Gatos, California (October 19-20, 1977), Shenandoah, Iowa (October 4, 1981), Sacramento, California (November 11, 1999), and Burlington, West Virginia (September 19, 2000) which were analyzed by this laboratory. One sample, (Shenandoah Iowa) was associated with multi-witnessed UFO activity. The Burlington, West Virginia sample was associated with a strange sound and physical effects (illness).