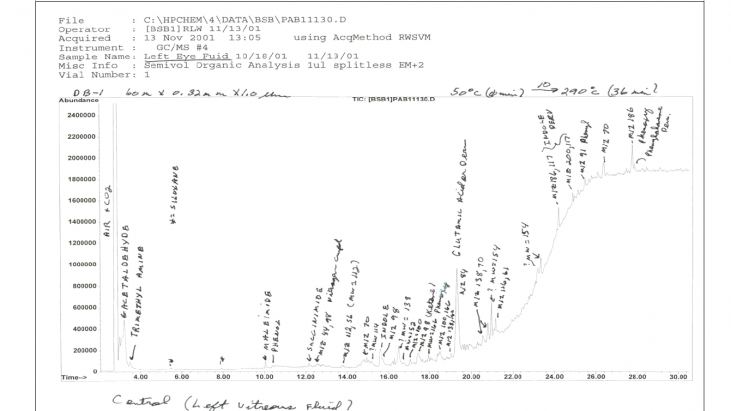 A cow (#8) was found mutilated on the morning of April 7, 2003. “….knife marks were found near the animal’s teat which was intact but partially removed. No blackening was noted around the animal’s mouth or tongue, but a bite shaped wound was apparent in the roof of the animal’s mouth as well as on the tongue, consistent with, according to the veterinarian, the animal biting down hard.

The animal was found dead in eight inches of mud, about 70 feet from the roadway. The owner and local law enforcement noticed both fresh vehicle tracks in the snow as well as three separate sets of footprints in the snow.”1 Vitreous fluid was removed from the animal’s eye and submitted for GC/MS analysis to determine if any foreign materials are present. Identification of foreign material could indicate whether the animal had been drugged before euthanasia.

1.) Analytical results do not confirm the presence of an unusual substance. However, the possibility of a brominated material is not ruled out. Expensive, additional analysis would be necessary to confirm its presence2. Additionally, tryptophan derivatives are present, which would be expected to be found naturally in an animal. However, forms of it are also known for their sedative properties. It may be speculated that a derivative might be used as a ruse to avoid drug detection. And finally, it is possible the animal was not drugged.

2.) No oxindole is detected. This is a foreign substance which had been found in another mutilated cow.  Derivatives of oxindole are known for sedative properties.

3.) Other materials detected in the vitreous fluid are attributed to natural and possible decomposition products.

Identification of a White Substance that Formed Rings in Fields after Plowing (New Pine Creek, Oregon)