Home » UFOs » Trace Evidence » Analysis of Soils from an Ice Pictogram Formation which was found in Snasa, Norway (December 2003)

Analysis of Soils from an Ice Pictogram Formation which was found in Snasa, Norway (December 2003)

The background as described by Nancy Talbott follows:

“A most unusual pictogram” was found in Norway in December 2003. It was made up of ice, 2-3 cm high, formed in rings and pathways. A light snow had fallen on top of the ice circle making it clearly visible.

The following spring fieldworkers took 4 soil samples and 4 soil controls in the hopes that you could look at them for any sign of a contaminant in the soils that might account for the ground/snow melting and then re-freezing.

Interviews with locals provided no ready explanation for the marking. The field was simply a grass field/meadow.

That spring of 2004 showed some of the marking in the growing grass where, apparently, the grass was not growing normally. From the photo it looks as if the ring areas may have been mostly dirt in 2004, when sampled. Perhaps some substance has impeded the growth of the grasses?

The field team says that lime and fertilizer had been spread on this field by the farmer one week or so before the soil samples were taken.”

A photograph and diagram of the site follows: 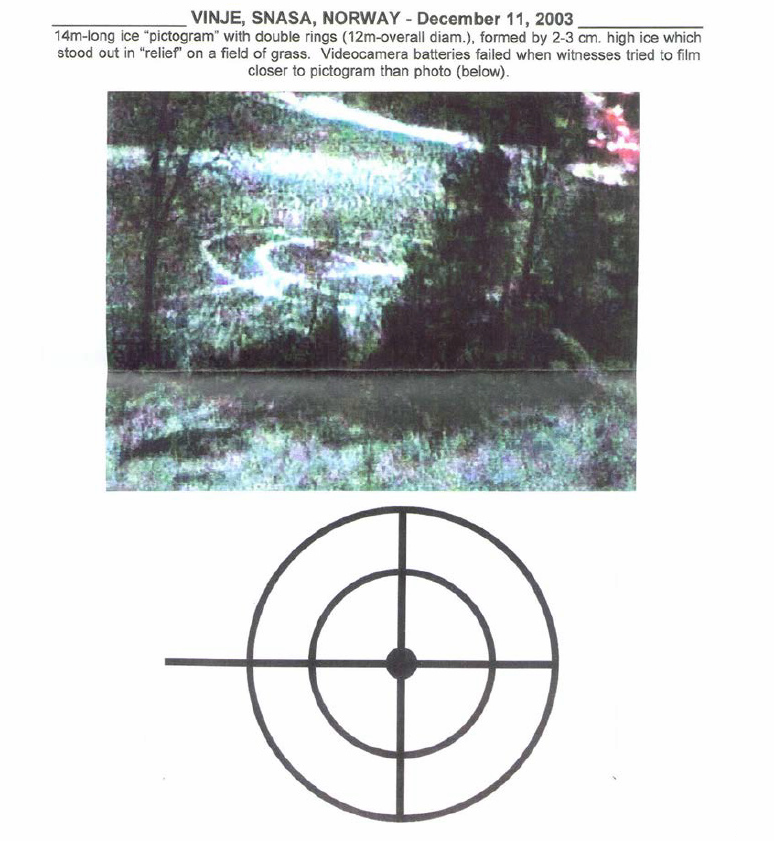 The object of this analysis is to determine whether any contaminants are present in the pictogram soils that would produce the observed design.

No unusual contamination was detected in the pictogram soil. Either no chemical was used to produce the pictogram, or it was depleted and dispersed into the soil long before sampling.

There are materials detected in both pictogram and control soils. Ammonium nitrate predominates. This is from fertilizer. There are also other natural soil organics, which include a small amount of natural ester and a very trace level of a waxy long chain hydrocarbon.