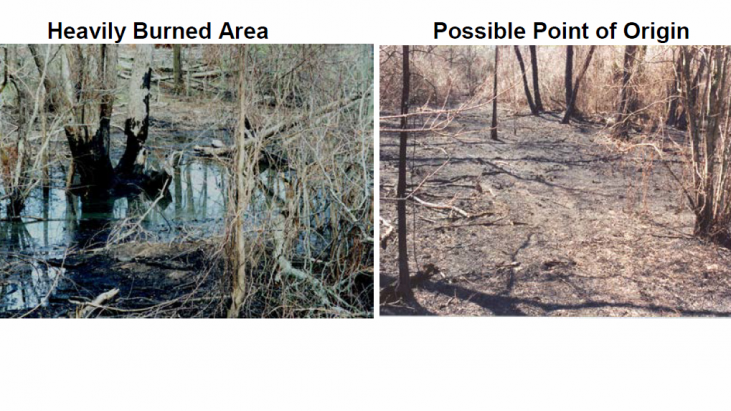 Analysis of Samples Related to a Fire in England, Arkansas

An unusual fire occurred on March 9, 2000 in Pulaski County, Arkansas. The fire was unusual in that the burn area was ca. “a mile-long, 150 yard-wide area of intermittent fires; in some burning areas the fire was reported to be excessively hot and burning with a sparkly effect.1” There were reports from various witnesses of such things as explosions and aerial light phenomena.

A number of people who were on-site were interviewed and seemed to feel the fires were “bizarre”. 20 samples of ash and soil, which included controls, were examined to determine the cause of the fire. Some possibilities that were suggested include: illegal methamphetamine lab having blown up; 2) multiple meteorites; 3) misfired missile from the Little Rock Air Force Base; 4) plane wreckage (though there was no debris or report of a missing plane). Other observations were that a crop duster had been at work in the area; a power Plant (White Bluff) is 5 miles SE of the site; The US Natural Center for Toxicological Research is about 7-8 miles SE of the site.

These sources could have contributed unrelated contamination to the fire debris. The two photographs were submitted with the samples.

This analysis does not detect material that may suggest an unusual cause of the fire. Typical mineral components of soil and burn residues from vegetation are detected. And in one sample (a purple/gray ash) an additional component, KHCO3, typically used as a fire-extinguishing agent is present. I suspect the samples examined were not directly from the points of fire origin. Samples from such sources would reveal more pertinent information.

There are ignition sources that could be ruled out if (per chance) any of the samples are from a point of origin. For example, we can say that no trace hydrocarbon residues were obvious which may rule out a fuel source. The water extracts for the most part are noted to be on the basic side which possibly eliminates strong acids.

Chloroform extracts reveal esters which are natural to soil, i.e. long chain fatty acid esters. Following are the more detailed conclusions provided by the analyses for the site soils and ashes.