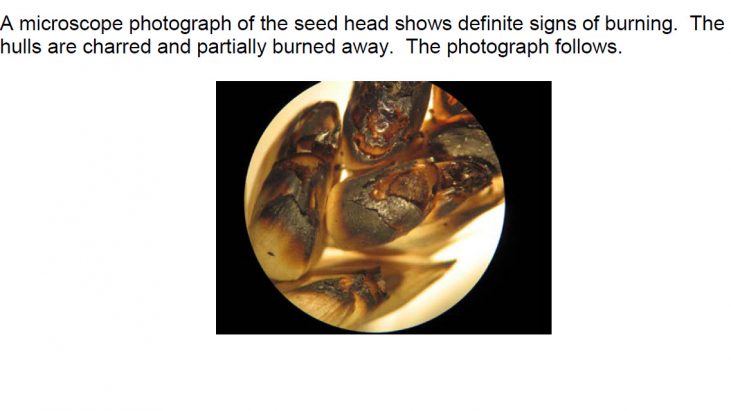 Analysis of a Blackened Hull from a Wheat Seed-Head in a Crop Formation (near Hoeven, Holland, August 2, 2010)

A wheat crop formation was “seen” by Robbert van den Broeke in a vision, as it was occurring. This formed on August 2, 2010 in Holland. Roy Boschman went to the location described by Robbert as soon as it was light. He indeed found a formation. He also noted some of the seed-heads appeared to be partially burned. These were at the very end of a partially completed ring, or “arc”, which was part of a formation. The objective is to determine whether the cause of the blackening was burning or ustilago fungus. Following are photographs with a graphic of the formation, the formation, and the blackened seed-heads.

The analysis shows the seed-head top is burned. The heat it experienced appears to be localized because the bottom part of the seed-head is normal. The source of the heat is unknown. A logical speculation is that it was involved in the creation of the crop formation. The source was either hot, or there was an energy field around it that induced the seed hulls to burn.

Analysis of Soils from an Ice Pictogram Formation which was found in Snasa, Norway (December 2003)

Analysis of Black Material on the Roots and Inside Corn Stalks from a Crop Formation (Mission, B.C., August 2002)

Identification of a White Powder Found in a Crop Formation (Hoeven, Holland, October 5, 2009)

Another Pennsylvania Bigfoot Close Encounter with a Car