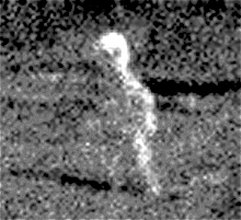 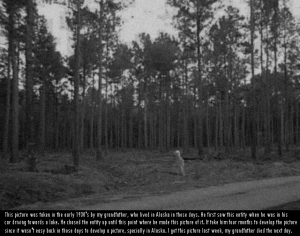 This is the highest resolution available.

The included picture was taken by my grandfather in the early 1930s. I scanned the image immediately after he gave it to me last week. I wish to remain anonymous since I don’t want anything to do with any research or whatever on this.

I know it looks like an alien or a Bigfoot and I know my grandfather was telling me the truth about him taking this picture. That’s why I think it should be in the right hands. You are the only one I’m sending this to, so please respect my privacy and don’t contact me about this.

Alien Entity with potential other being highlighted.

The only additional information is contained on the bottom of the full size image, which tells us the following:

The picture was taken in the early 1930s by the sender’s grandfather, who lived in Alaska. The entitiy was first seen when the grandfather was on his way to a lake. He chased the entity until he got close enough to take this one picture. It was some four months before the photograph was developed, being in in a remote, sparsely populated area. The sender received the picture from his grandfather only last week His grandfather died the day after giving him the photo, and relating his story.

To say the least, I was intrigued by this mysterious message. What could this image be? I download it, and after looking at it a few moments, I knew it would be controversial to say the least. Little did I know that there would be more than one mystery to solve. As I began the task of selecting and cutting the area around the small creature, I thought to myself: “Wouldn’t it be something if this was the real thing, even though it may never be proven as such?” What if this gentleman’s grandfather had really filmed a creature from another world, and I was looking at the proof. My excitement was only tempered by the thought of not being able to prove it one way or the other. I would soon be faced, however, with the second mystery.

After doing a couple of trial runs, I was relatively pleased with the results, considering the fact that the scanned image was from a photograph approximately 70 years old. As I looked through several of the cutouts I had made, I thought maybe I saw something…something else. The entity’s right lower arm/hand region seemed to be obscured; but by what? So I went back to the original scan, and starting working on that particular area. What I finally saw, or thought I saw was a second, even smaller entity. Is it possible that we had a female with her child? I had done what I could, and the results were inconclusive.

I thought of the Patterson Bigfoot film that had been the cornerstone of believers for many years, until it was proven as a hoax. In other words, I have no definite answer as to what we are looking at here.It is one of three things:

1) An outright hoax, (someone in a suit, a la Patterson) and all the time and effort was wasted.

2) A single unknown being, origin unknown, and we are without a way to go any further toward discovery.

All is not lost, and just like beauty being in the eye of the beholder, so is the result of what we have here.

One final question remains; Which is more important anyway, the final solution of a mystery, or that mystery remaining alive and well?