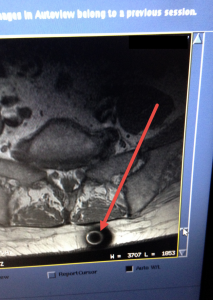 The following was submitted to The Black Vault in July of 2014. After a few emails back and forth, certain things were clarified. The questions I asked are below, along with the witness’ answers. They have decided to remain anonymous.

Please see attached photo. This has showed up on 2 separate MRI one in August 2011 and yesterday 7/13/2014. 2011 the surgeon pointed this out and said he didn’t see anything in there during surgery. yesterday the MRI tech pulled me out of the machine to question what it was. What are your thoughts? Kinda freaking me out a bit!

Do you recall anything strange happening to you, or this object just showed up out of nowhere? Any experiences?

They’re was a time when my daughter was really young. It felt like very real dream. I was taken into a ship, I was very upset cause my baby was home alone, but not afraid of “them”. The beings in this ship grabbed my side high on the right, it was like they had tacks in their finger tips, it calmed me down, I can’t say I saw their faces, I notice they wore some special outfits. I woke in my living room sometime later.

I had bruise marks on my side. I, at times, still wake in the morning, and will feel the discomfort look in the mirror and I’ll have those bruises.

I think I’ve been followed or watched I guess for many years. The first time I remember being taken was 27 years ago. I’ve lost time many times over the years and wonder.

The metal piece, showed up on the MRI in 2011. It’s very low in my back left side. The picture I shared was from 2013. The MRI tech pulled me out of the scanner to show me the artifact.

After my surgery in 2011 the surgeon actually asked me if I’d been abducted, cause of that artifact. Dr said they couldn’t see anything in there during surgery, but it’s clearly there on MRI and CT scans.

My daughter always talks about me being abducted, like somehow she remembers something.

Why did the doctor ask if you were abducted?

They don’t know what it is they’re baffled. The surgeon said he had a patient that had a similar experience.

Update on 4/7/2015, 1:00pm Pacific Time – After seeing some of the comments below, they submitted the following additional information. They will continue to monitor feedback, and add where necessary.

I saw a comment already. Dr Griffith  (neurosurgeon) did look during surgery, as it showed up in the MRI 2 days before my surgery. (2011) They couldn’t find anything. (2015) My primary care doctor spoke to the radiologist about it, radiologist viewed it on the MRI and an old CT scan,  says it’s real small like needle tip small on the CT scan. I’ll try to get my hands on that film. I might add, I just had another surgery 4 weeks ago, still nothing there. Just on the scan. All of them. Weird.

Do you have any thoughts on this experience? Please, post your comments below. The anonymous witness is looking for feedback.