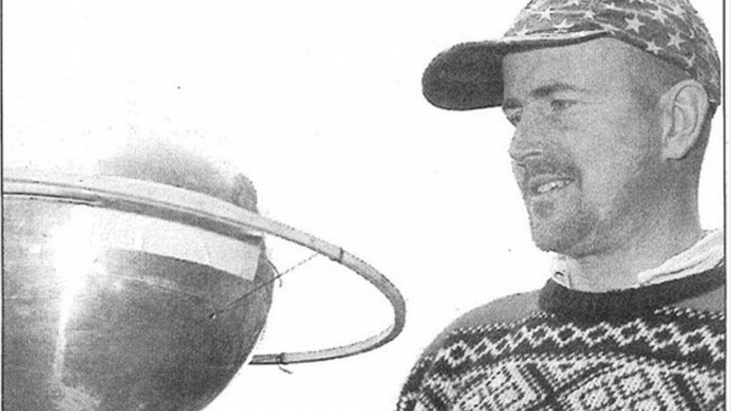 IT WAS almost a case for the X-Files’ Mulder and Scully, when an unidentified flying object was spotted hovering in a field in Colemans Hatch back in April 1998.

Carpenter Lawrence Praill, 32, was working at Casablanca Plant Nursery in Hartfield Road when he saw a silver sphere hanging seemingly unaided in a next door field.

Mr Praill told the Courier. “I saw the object, which was about 50yds away through the hedge at about 3pm.

“But I thought I was seeing things so I had to take another look.
“I then tried to ignore it but curiosity got the better of me and I ventured over.

“I was very cautious because all I could see was a sphere with bright yellow flashes on it, which appeared to be in the middle of disc. It looked very eerie, but I was curious.”

But when Mr Praill approached the UFO, he realised it was not of extra-terrestrial origin. On closer inspection the sphere was being suspended in the air by a large white balloon, it also had the remains of two other balloons – one red and one white – and parachute attached to it.

Mr Praill added: “When I saw the balloon and parachute I just laughed through relief as I was quite scared when I first noticed it. I brought it back to the nursery and took it apart, but there was nothing inside.

“We really want to find out what it is and where it is from as it is a complete mystery. But between us we think it is probably a weather balloon.”

But a Met Office spokesman denied the object was connected to British-run weather experiments.

He said: “Our weather balloons consist of a single orange balloon attached to a polystyrene box which contains the equipment.

“But I do not know what this is although it could be an amateur experiment.”

UFO Photographed in the Clouds over Stockton, California