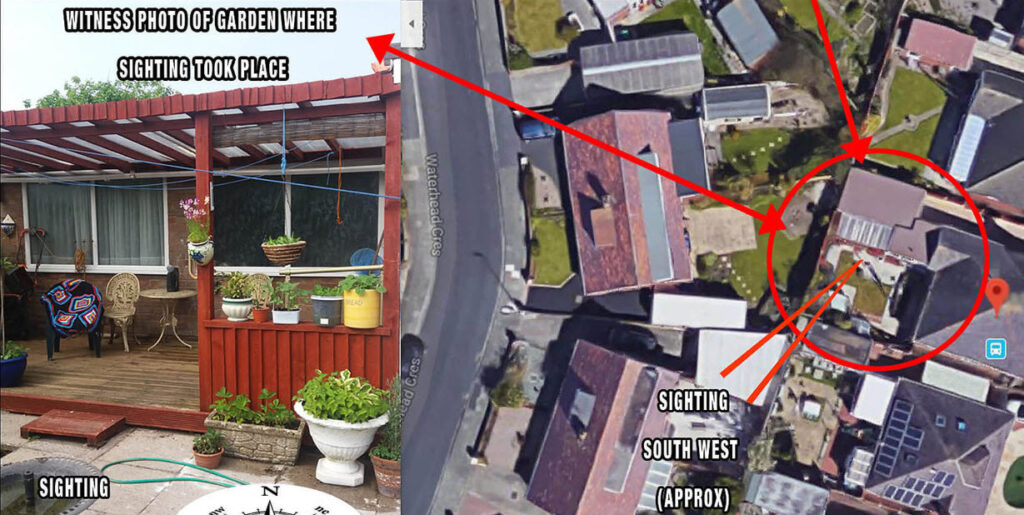 This case was submitted to The Black Vault / TBV Investigations on May 2, 2018, and assigned to investigator Paul Wright for analysis.

The witness testimony is derived from two witnesses, outlined below.

On the 8th April 2018 at 6.15 p.m. I had a feeling to look in the sky were Iive in {Thornton \Cleveleys. Blackpool,Lancashire,England.} As I did this I saw a object that looked like 3 dots in a shape like a upside down V As I watched it looked to go smaller and higher in the sky. 6.25 pm the object just appeared in one line Top to bottom there was lights coming from it,top.was metallic blue. Middle was silver\yellow.and the bottom part was light orange {flashing} After a few seconds want invisible before coming visible again. As I then looked to the right came what looked like a long multi coloured submarine.It was as if it had been called.{As I live in sea side the sub looked to come from the sky over the sea}
Shortly after the objects disappeared in a brown circular cloud then the sky turned blue and clear again

When my husband first see the V shaped object in the sky he was in the sun lounge. To get a better look he went outside to see if it better.A few minutes later I saw the vertical block with flashing lights before it went invisible for a few seconds, reappearing in the same place until a sausage shaped vertical object appeared with flashing lights. This vanished after a few minutes into a brownish round cloud with a hole in the middle. (edited)

The submarine/sausage seemed to appear from over the sea and was horizontal. This was not flashing like the V shaped one at the time. At first my wife could not see fully from inside the sun lounge so like myself she came into the gazebo. This is without Windows and is fully open As we call it the garden. (edited) (submarine / sausage confirmed horizontal)

Image below shows sequence of events: 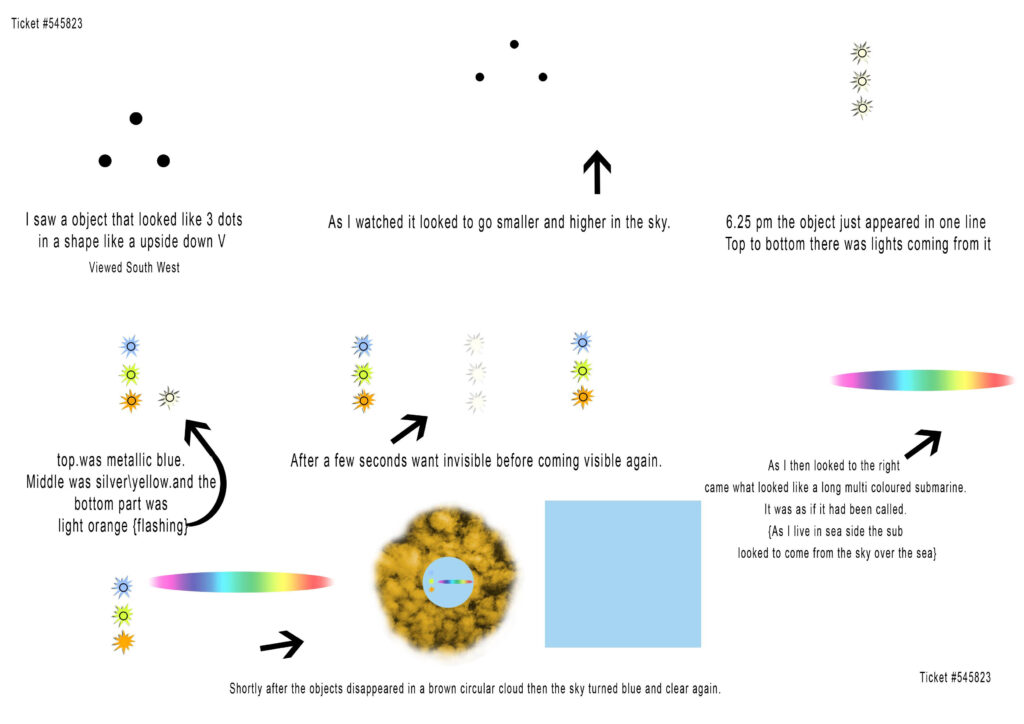 Image below shows location of sighting

(Note: Identifying marks in the map have been blurred or deleted. The internal case files of TBV Investigations remain intact, but for public view, the location of the witness is protected.) 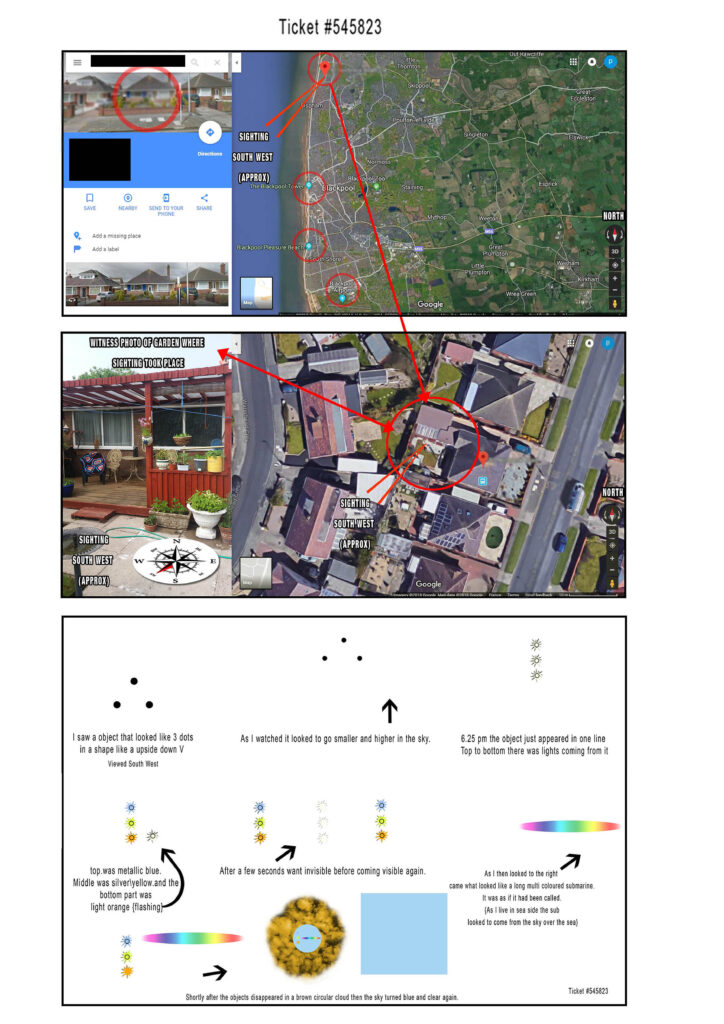 With the lack of video or photo evidence, I will attempt to identify what the witnesses observed based on the following facts along with witness statements. 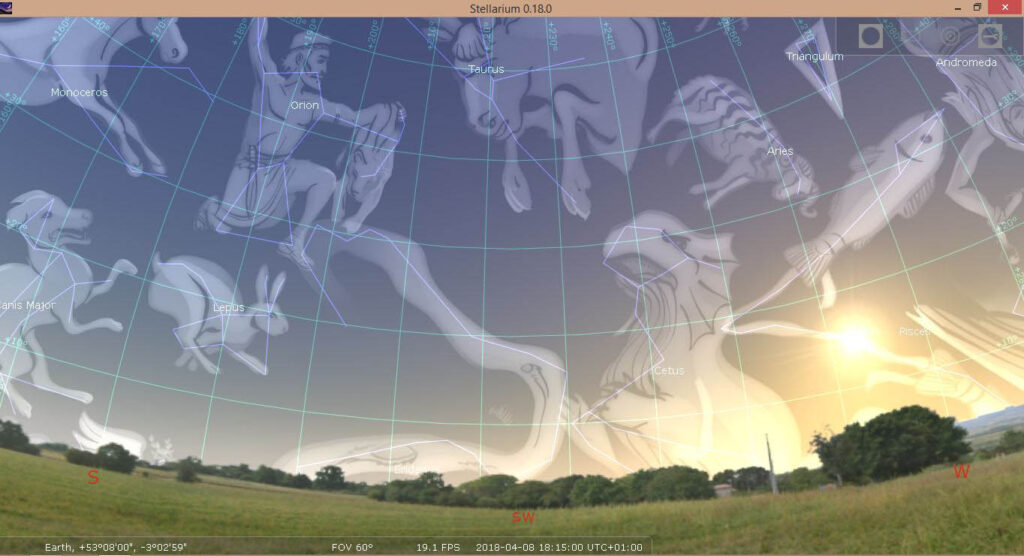 Researching Stellarium for know celestial objects on 08-04-2018 @ 6:15 pm revealed multiple celestial objects in the sky, however it would be difficult to speculate what was visible by eye at that time due to the weather (cloudy with sunny conditions) throughout the sighting.

Based on the two witness descriptions and lack of sufficient evidence I am unable to make a solid conclusion. At the time of writing this I hope to receive replies to my inquiries from the aviation, media and UFO organisations….