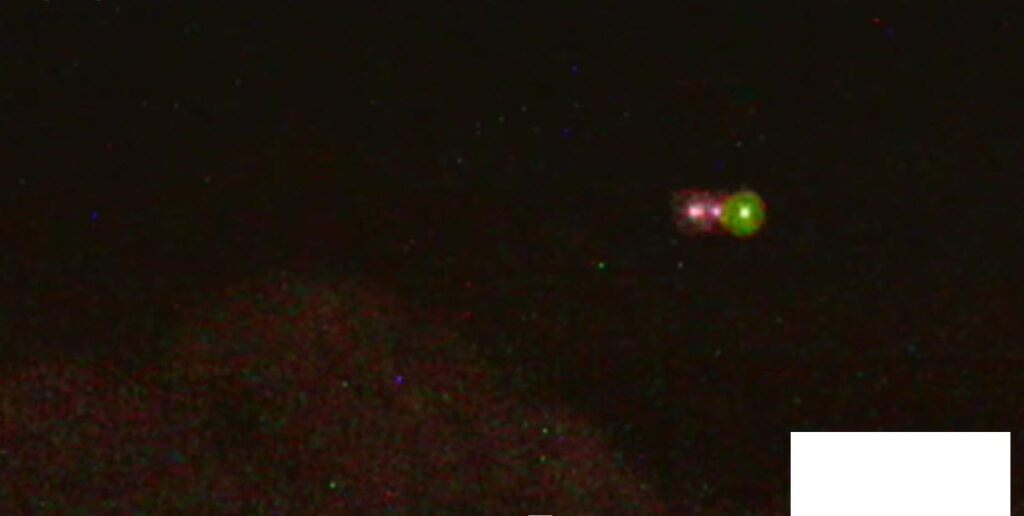 Witness believes this case is solved. See Below.

The following was submitted to The Black Vault. It is used here with permission. Please note, the video does not have the correct date on the window burn due to incorrect settings.

This video was made with a Luna Optics color night vision camera LN-DM50-HRSD.

It is 5X but can go to 20X. This was approx. at 9:00 on July 4th, 2015 at the Sabino Canyon parking lot situated in the northeast edge of Tucson. I’ve always left the time stamp of my videos at its original 2011 so ignore that. The sky was completely overcast over the Catalina Mtns. The small dots you see on the screen are normal for night vision cameras and are not stars in the sky.

The very first couple of seconds shows some odd lights in the right of the frame. Those are the radio towers on the mountain out of focus thus making them look odd.

There were a few cars coming and and going out of the parking lot and they account for some of the light shifts. Unfortunately I zoomed in too much and it destroyed the clarity of the video but it still captures the amazing event that we witnessed.

There are a couple of times I adjust the focus and it makes the 3 lights of the UFO seem to morph but that is only, again, me focusing. The main 3 lights stayed distinct in the sky and only look like they become one light and then back to 3 because of my tinkering.

The eyewitness also submitted a corroborating video, from a friend, who also shot the same event. Here is the video:

Note from The Black Vault

After seeing the radio towers in the daylight video, I went ahead and asked the witness for clarification, to ensure the lights were not around the radio tower itself.  This was his response:

The radio towers are approx. 8 to 10 miles away from where we videoed. The UFO had to have been at least 30 miles away to be in that good of a focus since airplanes 8 to 10 away require me to adjust my focus. The radio tower lights are way out of focus and yet the UFO is in focus since I leave my lens at a setting that on this particular camera has stars, satellites and far off planes in focus without me having to change the focal setting. The radio tower light can only be seen in the first couple seconds of the video to the far right edge of the frame. Hope that helps but if not please ask for more clarification.

Details on the Location

The following was submitted by the eyewitness, to better explain the location of the sighting:

The radio towers are on Mt. Bigelow that just a part of the greater Catalina Range and the towers are now confirmed to be about 8 miles from the parking lot at Sabino. Panoramio – Photo of Mt. Bigelow Broadcast Tower Site, East of Tucson, Az Bigelow is just to the left of Willow Canyon on the following map and the pointer at the end of the red line is likely where the UFO was way out in the middle of desert wilderness. It may have been closer but it was certainly beyond the mountain range. The line in the photo at the bottom right begins at the Sabino Canyon parking lot and goes to where the UFO approx. was at the pointer.

On October 12, 2015, I received the below letter from the witness. There has been much speculation and investigation, and it is possible, though he won’t say with absolute certainty, that this is resolved. The letter read as follows:

After going up on the mountain itself 3 times and doing a lot of figuring things out to a rational conclusion, it looks like our now infamous 4th of July videos were of human origin.  The one and only place the lights could have been was only a few yards long and they would have to be motorcycles since cars couldn’t have parked on that narrow a road.  They were showing their headlights down to their buddies below who were watching the fireworks and using green and blue lasers to augment their position.  They were probably in cellphone contact as well since that is a cell hot area up there.  It sure made for a beautiful UFO video too good to be true it seems.  MUFON only did a partial investigation and then only assumed it was vehicle lights but never pegged exactly where they were so I was not pleased with them calling it “case closed”.
Everyone I know still thinks this was a UFO event even though I’ve presented the evidence otherwise.  I’ll leave a 1% chance of it being ET oriented just in case.  Ha!  Here’s the webpage where I finally solved all the anomalies  More Evidnece – Getting to the Truth, Tucson UFO Video July 4, 15
Thanks again John for your open minded position.  —Tom
On August 12, 2016, I received the below email, which puts the case to rest that the witness no longer believes it is a UFO:
Hope all is well.  Regarding our infamous July 4th video of 2015, we went to Sabino Canyon on July 4th 2016 and saw pretty much the same light configurations on Mt. Bigelow and they were all terrestrial thus we can put to rest 100% our videos from 7/4/15 as being headlights and flashlights…