Witness Lane submitted the following testimony which is unedited and appears as it was submitted.

“Large glowing object, it seems to change colors from inside out. It comes and goes and changes spots in the sky in a matter of seconds. It is bright orange but changes rapidly from orange to green to blue then back orange. I have tried looking through a telescope ( Walmart brand bought for my young son ) it does not zoom in close, but it looks like it is pulsating inside out. I have pics and video with my phone that I will try and upload.” 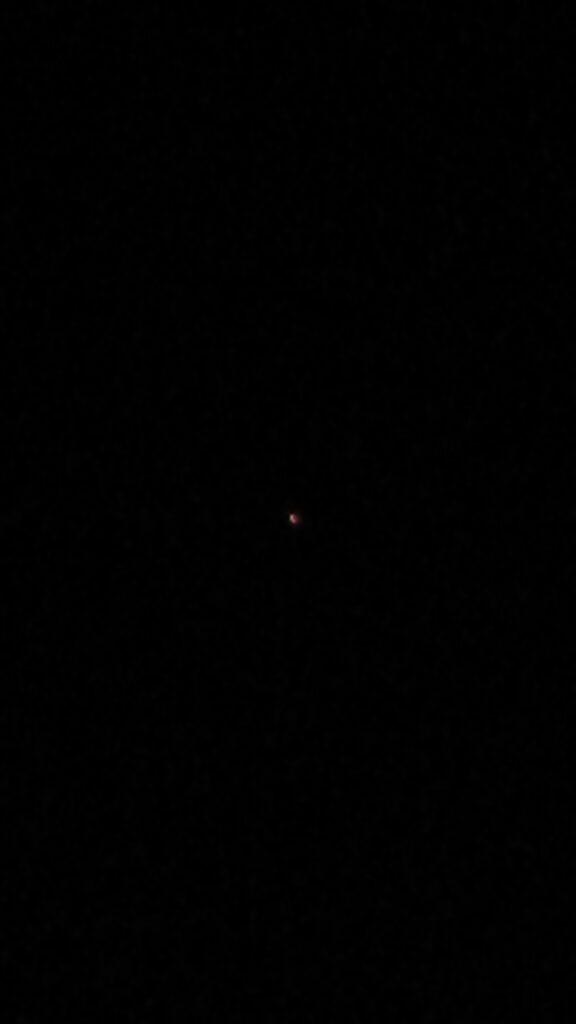 At the time of the witness’ sighting, it was 81 degrees, Dewpoint 73 degrees, Humidity 77%, Wind speed ten mph SSW, and was cloudy.

Searching the archives of Stellarium, (a planetarium software that shows exactly what you see when you look up at the stars), I was able to view exactly what celestial objects were visible to the witness in his night sky from his location in Knoxville, TN on 07/14/2018 at 10:00 pm.

Based on the witness’ description that the object was pulsating (twinkling) showing colors of orange, blue and green is consistent with stars. Two of the brightest stars were visible, Arcturus which is the 4th brightest star and Vega which is the 5th brightest star we see from earth.The visible planets Saturn, Jupiter, and Venus, can be ruled out as the object he observed because planets do no pulsate (twinkle) or change colors.

Refer to the article link below, Why do stars twinkle but planets don’t.

Below: Excerpt from the above article. Credit, Deborah Byrd, EarthSky.com

“Stars twinkle because … they’re so far away from Earth that, even through large telescopes, they appear only as pinpoints. And it’s easy for Earth’s atmosphere to disturb the pinpoint light of a star. As a star’s light pierces our atmosphere, each single stream of starlight is refracted – caused to change direction, slightly – by the various temperature and density layers in Earth’s atmosphere. You might think of it as the light traveling a zig-zag path to our eyes, instead of the straight path the light would travel if Earth didn’t have an atmosphere.”

“Planets shine more steadily because … they’re closer to Earth and so appear not as pinpoints, but as tiny disks in our sky. You can see planets as disks if you looked through a telescope, while stars remain pinpoints. The light from these little disks is also refracted by Earth’s atmosphere, as it travels toward our eyes. But – while the light from one edge of a planet’s disk might be forced to “zig” one way – light from the opposite edge of the disk might be “zagging” in an opposite way. The zigs and zags of light from a planetary disk cancel each other out, and that’s why planets appear to shine steadily.”

Upon analyzing and enlarging the witness’ photo, I immediately recognized the object as an out of focus or defocused star. I have conducted tests while filming celestial objects defocusing planets and stars and archiving those images and video footage. The witness claims to have used a cell phone to take the single photo he provided; however, the camera he used while defocused on the star captured the six aperture blades inside the camera’s lens depicting the object with a hexagon shape.

The vast majority of cell phone camera lenses do not use an adjustable aperture that opens and closes regulating the amount of light the camera sees, and the camera sensor controls the exposure. Cell phone camera lenses use a fixed aperture of f/1.8 in a higher priced smartphone or f/2.2 in less expensive phones. When taking a defocused photo of a star with a cell phone, we would not see any internal camera lens aperture bladed. We would see the defocused star as an Airy Disk. Due to the lack of answered questions from the witness along with his statement he would try and upload video and photos from his cell phone, I have formed the opinion the single photo he provided was taken with a conventional DSLR camera with a lens that contained an adjustable six-bladed aperture. Additionally, based on the photographic evidence alone and comparing my photo to the witness’ photo the only conclusion is the witness photographed a star. Basically, it doesn’t matter what camera was used by the witness as the evidence and conclusion is in the photographic comparison.

Misidentifying celestial objects as UFO’s is a common mistake. Sites like YouTube have thousands of mistaken captures filmed by individuals that believe they captured a UFO. Based on my experience, my archival photographic and video evidence, I believe with no doubt, the witness mistook either the star Arcturus or Vega as an unidentified flying object. Again, this is a common mistake.

In closing, I would like to thank witness Lane for submitting his case to TBV Investigations. I hope this investigation answers what he observed.