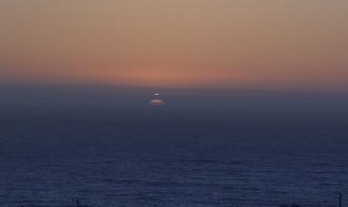 My husband, my brother, my sister-in-law and I were vacationing at a coastal house in Bodega Bay, CA (about two hours north of San Francisco). We were watching the sun set over the ocean and preparing to watch the clear night sky, so we had big binoculars (16X70) set up on a tripod on the west-facing patio. Moments after sunset (which occurred at 7:15 p.m., [see photo “100_1605[1]sunset”], while the sky at the horizon was still orangey, we noticed a very bright orange/gold streak moving at a slightly upward angle in a north-to-south direction [see photos “100_1607[2]picture 3 unenhanced” and “picture 3 enhanced for brightness and contrast (3)”]. At arm’s length and measuring between thumb and forefinger, the streak early on was about an inch above the horizon. We then looked at it through the binoculars and we saw not only the streak, but a dark, somewhat elongated object that was rounded at the leading edge of what we then called a “trail”. Over the next minute or two, the trail got to be about four inches long (as measured above) and the object took up a good ¼ to ½ inch of that measurement. We continued to see the trail but not the object with the naked eye.

A minute or two after we first saw the trail, the object/trail appeared to stop and hover in place for another 10 minutes or so, but the trail did not dissipate at all like a vapor trail would. (Since we were facing west, it’s also possible the object was not hovering but rather moving west to east or east to west after it appeared to stop.) We could see the trail and the “unmoving” object for a total of 10 minutes or so until it got too dark to see through the binoculars. The pictures we took do not even begin to show the brightness of the trail.

Based on the “distance to horizon” calculator on the Internet, we estimated the distance to the object was about 15.5 nautical or 17.9 statute miles. (We did a Google Earth calculation that showed our rental house was 172 feet above sea level and, adding the five-foot height of the tripod, resulted in a “height of eye” of 177 feet.) If the object was almost 18 miles away, the object would have to be quite large to appear as big as it did, even though it required binoculars to see it.

Our collective conclusion was that the object was too big to be any kind of airplane and that the trail was not a vapor trail. The way the object appeared to stop and hover, and the fact that the trail did not dissipate, were also very strange. Maybe it was some kind of missile, but we sure can’t figure it out. None of us had ever seen such a thing.