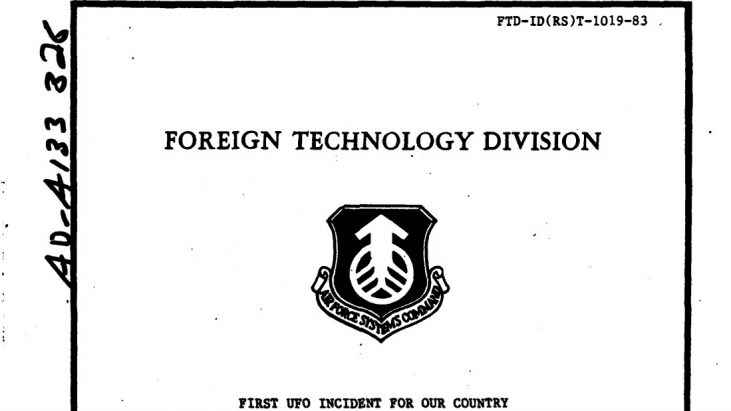 UFO Incident Causes Sensation Throughout Half of China, 24 July 1981

The following document was obtained under the Freedom of Information Act (FOIA). It is an edited translation from a Chinese publication entitled, “Hangtian.”  It was translation and archived by the Foreign Technology Division (FTD) located at Wright Patterson Air Force Base, Ohio.

This is one of many documents that proves that the United States Air Force, and the United States Government, was still interested in the UFO phenomenon, DECADES after the closure of their “Project Blue Book” investigation, which lasted from 1947 – 1969.

It was a clear, brightly starlit night, on 24 July 1981, in southwest and northwest China as well as a large area of southern and south central China. The Milky Way slanted across the night sky and there was no moon. Suddenly at 2238 hours, a strange star-shaped bright spot was sighted by a large number of people in Sichuan and Yunnan provinces when it appeared in the sky to the north.

The glimmer became brighter, began to oscillate and then a cloud-like band of light formed around the circumference of the bright spot.

The huge spiral shaped UFO with its bright silver color lighting up the cloudless night sky was an especially striking, magnificent and grand sight in contrast with the star-studded sky. In the brief six or seven minutes from its appearance to its disappearance, some 10,000,000 people simultaneously witnessed this extraordinary sight in the night sky.

In the first few month after the incident occurred, approximately 40 newspapers, periodicals, and radio stations have published and broadcast some 70 news reports and analytical research articles concerning this incident.

The New China News Agency transmitted this information to the entire world and the Hong Kong press continues to print reports with impressive layouts. The U. S. Center for UFO research in Illinois has also followed this event with great interest.

According to the Chinese Association for UFO Research, such a huge spiral UFO has occurred at least three times in the last four years over northwest China. During the inquiry into these matters, three main viewpoints have been formed: “the meteor theory”, “the aircraft theory”, and “the flying saucer theory”.

The Advanced Aerospace Threat Identification Program (AATIP), Tom DeLonge, Luis Elizondo and the Claims of To The Stars Academy