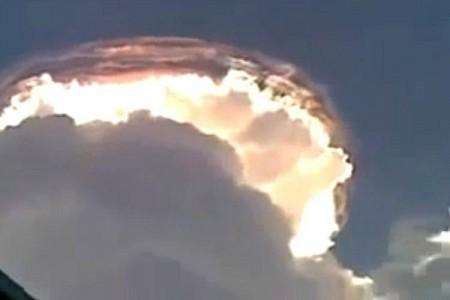 An amazing cloud formation filmed in Russia has led some observers to conclude that the only explanation can be extraterrestrial beings visiting our little planet.

The impressive video shows what appears to be some kind of UFO hovering behind a cloud. Or not, depending on your point of view – either way, it’s an impressive sight.

Could this be yet another Russian sighting of visitors from other galaxies? There’s certainly been plenty of unusual activity in that area over the last year if the increasingly bizarre findings are to be believed (see below for more Russian alien ‘evidence’).

Lenticular cloud formations, which form due to unusual wind conditions and moisture in high altitudes are often mistaken for UFOs because of their saucer shapes – but of course, that’s what THEY want us to think. In this case, the light from the sun makes it look all the more spectacular. See the video above.