The following was submitted directly to The Black Vault, by Jesus Payan.  All photographs are copyrighted to him, and can NOT be reproduced without prior, written, permission.

According to Mr. Payan:

I went outside to see the storm that was brewing and thought, what a great shot of the sunset and proceeded to take a photo when I saw the object appear then disappear as I took photos. It was motionless and silent.

Tularosa, New Mexico – 6:11 pm
Location: My front yard.
I can be reached through Facebook
Facebook.com/jesusjr2012

Note from The Black Vault: I did confirm that this object was seen with the naked eye, thus potentially ruling out the probability of lens flare, or an artifact from the camera. 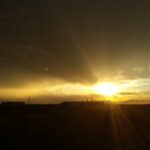 Interestingly, this witness is running for the 2016 Democratic nomination of President of the United States. The following is some background information on Mr. Payan:

Jesus Payan is a Hollywood actor who has appeared in over 30 films and TV shows but best known for the Emmy award winning Breaking Bad and Emmy nominated show Better Call Saul. Born into a U.S. Air Force family and a former Federal Detention Officer, he also worked for the Behavioral Sciences department in the training of Crisis Intervention for Law Enforcement.. He is also known as a Philanthropist and mentor to many youths across America and Native American Nation’s. A self-taught Lecturer on Ancient Civilizations and Anthropology.

In a time when our country is facing multiple distressing hardships economically and socially, effecting us at home and abroad. I feel it is my duty as an American Citizen to step up to the plate and bring our Great Country back to it’s Original Values and Strengths for it’s People. For when The American People are Strong we can be strong for the rest of the world.

THE JESUS PLATFORM:
-Diplomacy / Peace
-Universal Health Care
-Protect our Rights, Liberties and Freedoms
-Free Public College
-Increase wages for Teachers
-Increase wages for Police
-End the war on drugs
-End Police brutality
-Demilitarize the Police
-End Private Prison Systems
-Decriminalize Marijuana/Hemp
-Find a new and Humane solution to the immigration situation
-Rebuild our Infrastructure
-Protect our Veterans
-Seek Diplomacy and peace resolutions
-End over seas Conflicts
-End Homelessness and Hunger here in America
-Bring jobs back to America
-Convert from fossil fuels to renewable energies
-Equal pay regardless of sex, creed or sexual orientation
-Equal rights regardless of sex, creed or sexual orientation
-Reform of foreign policies on trade that send jobs over seas
-Raise minimum wage and make sure it’s not followed by a mass hike in all living expenses.
-If it’s not good for all Americans it’s no good at all.