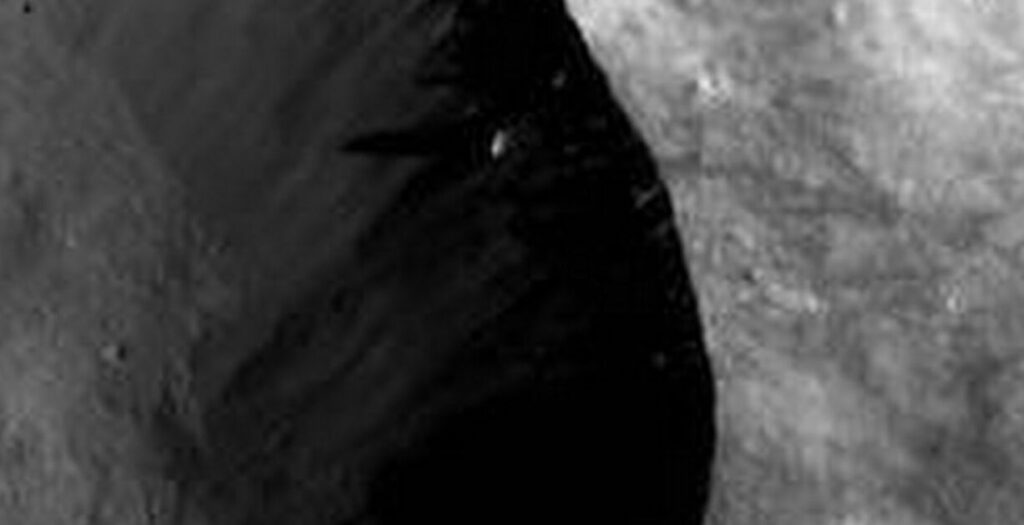 Note from Black Vault user Willease: I was searching through images from the Dawn mission to Vesta and stumbled on what appears to be structures near the edge in a crater. Notice the shadows…

Official NASA Caption: PIA15495: Layered Young Crater – This image from NASA’s Dawn spacecraft shows a young crater on Vesta that is 9 miles (15 kilometers) in diameter. Layering is visible in the crater walls, as are large boulders that were thrown out in the material ejected from the impact. The ejected material likely once resided deep within Vesta, since this crater formed within the deep Rheasilvia impact basin. It may provide clues to Vesta’s composition at depth.

This image was obtained by Dawn’s framing camera image was acquired on Dec. 21, 2011, during Dawn’s low-altitude mapping orbit (on average 130 miles or 210 kilometers above the surface). Rheasilvia is located at the south pole of Vesta. The image covers an area of 260 square miles (670 square kilometers).

The Dawn mission to the asteroids Vesta and Ceres is managed by NASA’s Jet Propulsion Laboratory, a division of the California Institute of Technology in Pasadena, for NASA’s Science Mission Directorate, Washington. Dawn is a project of the directorate’s Discovery Program, managed by NASA’s Marshall Space Flight Center in Huntsville, Ala. UCLA is responsible for overall Dawn mission science. The Dawn Framing Cameras have been developed and built under the leadership of the Max Planck Institute for Solar System Research, Katlenburg-Lindau, Germany, with significant contributions by DLR German Aerospace Center, Institute of Planetary Research, Berlin, and in coordination with the Institute of Computer and Communication Network Engineering, Braunschweig. The framing camera project is funded by the Max Planck Society, DLR, and NASA/JPL.

What are we looking at? On the crater wall, you will see what appears to be a very tall structure, casting a long shadow.  Given the fact that not a single object appears around it – some speculate this could be artificial.

What is NASA’s Dawn Mission? During its nearly decade-long mission, the Dawn mission will study the asteroid Vesta and dwarf planet Ceres, celestial bodies believed to have accreted early in the history of the solar system. The mission will characterize the early solar system and the processes that dominated its formation.