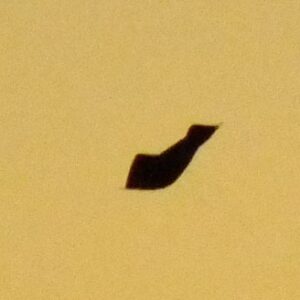 Close up and cropped image of the object.

The following was submitted to The Black Vault, and used with permission:

I was outside with my new camera and went to the beach to see if there were any birds to photograph. There was no one else there, and not really any birds. The light was fading as well as it was near sunset. I was looking south down the beach and saw a stationary object in the sky. It was impossible to judge the distance but I would estimate it was anywhere between 3-10 kilometers (~ 2-5 miles) away and about 1.5-3 kilometers (~ 1 mile) high off the ground.

It caught my attention immediately, as it was there in the sky, completely stationary, and I could see it with my naked eye (didn’t have binoculars with me). Completely stationary – as in, not hovering like how a helicopter would. You will see the shape of it on the photos. I don’t know how to describe it, other than it does indeed sort of resemble a helicopter but it more elongated and shows no signs of any rotors or other small bits.

I kept watching it for 10 minutes and occasionally taking photos. Even at max zoom I couldn’t get anywhere close to it. It didn’t move at all. There was no sound coming from it (not that I probably would have heard if it was that far away). I was quite excited and phoned my sister to come and see, and she was there in 5 minutes and agreed with me that it was weird and she hadn’t seen anything like it. Especially the impossibility of whatever it was to remain so stationary high up. 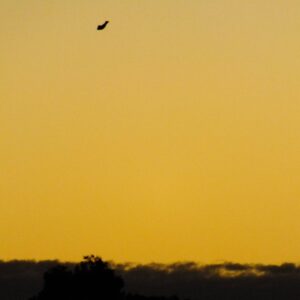 The sun was almost down at this point and it was then I noticed the craft/thing had lights on it. Red and blue lights. But it was too far away to distinguish where exactly on the craft the lights were positioned. The craft moved. I can’t remember the exact movements as it was too long ago. It was erratic and very fast. But very straight and angular. It moved like nothing we’d seen before. It suddenly zipped across the sky in a perfect horizontal line (estimated about 400 meters). It hung there stationary for a few seconds. Then suddenly dropped down about 500 meters in a perfectly straight line. It repeated this again about two more times, moving extremely quickly and in perfectly angular/straight directions. At about 1-2 kilometers above the ground it then dropped straight down.

My sister and I got in the car and drove us down the highway in the direction of where the craft looked like it had been above, but found nothing. As I said though it was impossible to accurately pin point how far away it had been. We continued down the coast going to some spots where we’d have a good view of the beaches from a headland. I was quite feverish with excitement at this point and ran out of the car through a restricted area by a lighthouse up to the top of the headland to get a view of the whole area. Nearly ran right off the cliff in doing so. But I was super excited about what we’d seen, and if I found a craft I was prepared to walk right up to it and give myself to the aliens or whoever was in there. I’d been somewhat of a UFO enthusiast a few years before, so that night for me was like a surge of excitement of the possibility of finding a UFO. Needless to say we didn’t see/hear anything further, and there was nothing about an unusual craft in the media – not surprisingly as it was near sunset and we were the only ones at the beach/vantage point.

General view of the location/beach (note: the cellphone tower light to the left has nothing to do with it, as the craft was much higher up than it)

Horrible photo, zoomed in and as a result blurred up and erratic from camera shake and lack of light. Shows the lights (predominantly blue)

Another general view of the location just before the craft disappeared (tiny blip similar to a star, above the cellphone tower), I assume that the lights to the right are stars