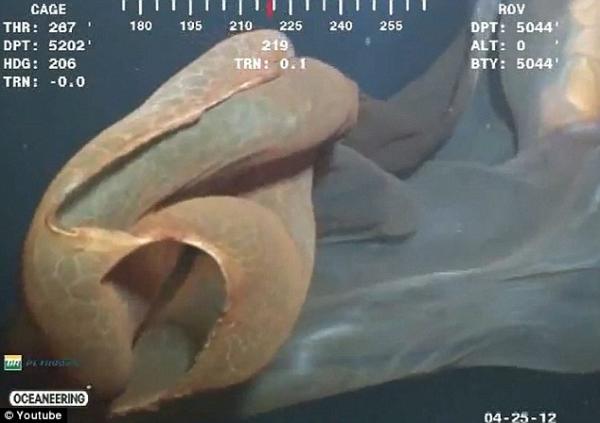 Many users on the internet are forwarding a video about a deep sea monster caught on an oil rig camera.  Although the footage is interesting, many believe they’ve identified the species on the rig.

Contrary to many media outlets touting it as possible evidence of a sea monster — it is believed to be the Deepstaria Enigmatica jellyfish.

Check out the article below for additional information:

Deepstaria Enigmatica Jellyfish caught on camera near the United Kingdom

TAMPA, Florida (CBS Tampa) – Did Capt. Nemo ever see anything like this when he was “20,000 Leagues Under the Sea”?
A mysterious creature was caught by underwater cameras recently during deep-sea drilling near the United Kingdom.
The camera catches the giant blob – which looks brown in color and appears to have scales – floating around, with organs and appendages sticking out, something rarely ever seen before.
So, should we be afraid of this new sea creature and will it take over the world?
Steven Haddock, a scientist for the Monterey Bay Aquarium Research Institute in Moss Landing, Calif., says that the mysterious creature is a Deepstaria Enigmatica Jellyfish, much to the chagrin of some Reddit users who thought it was a whale placenta.
“This bag-like jelly is not that rare, but is large, so rarely seen intact,” Haddock said on his “JellyWatch” Facebook page. “In the video, the swirling from the sub makes the medusa appear to undulate and it even turns inside-out.”
This type of jellyfish is usually found in the south Atlantic Ocean, some 5,000 feet below. According to the Marine Species Identification Portal, the jellyfish has “oral arms […] terminating in curious hook-shaped organ[s].”
Source and special thanks: CBS Tampa