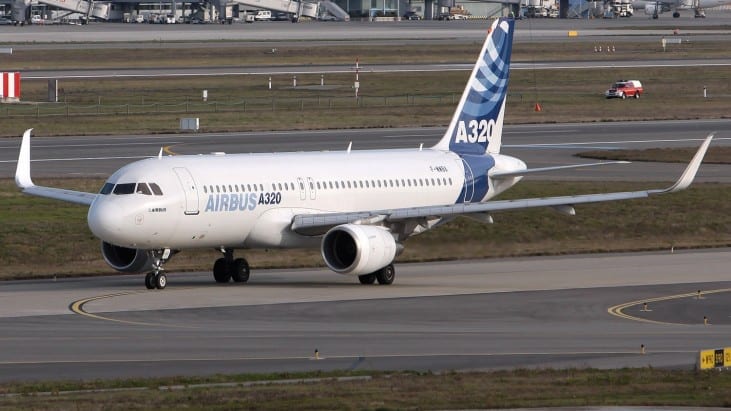 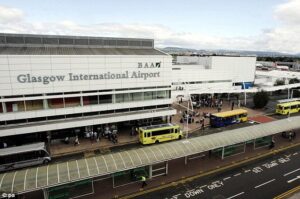 Approach: The plane was 13 miles away from Glasgow Airport (pictured) when it came within seconds of colliding with the unidentified object

By MARIO LEDWITH FOR THE DAILY MAIL

A passenger jet came within 300ft of colliding with an unidentified flying object, an official probe has heard.

Despite an investigation, the UK Airprox Board – which examines reports of near misses – could not explain the ‘blue and yellow’  object which passed under the  Airbus 320.

The incident happened on December 2 last year over Baillieston, 13 miles east of Glasgow Airport, at around 3500ft.

The shocked pilot reported the collision risk as ‘high’.

The A320 was descending into Glasgow in clear conditions with the sun behind, when both the plane’s pilots saw an object around 100 yards away.

The board’s report said: ‘The object passed directly beneath before either of the crew had time to take avoiding action or had “really registered it”, although they both agreed that it appeared blue and yellow (or silver) in colour and was “quite large” with a small frontal area.

‘The controller stated he was not talking to anyone else in that area and nothing was seen on radar.’

In its report, the board dismissed a variety of possible explanations.

It said: ‘In the absence of a primary radar return, it was unlikely that the untraced aircraft was a fixed-wing or rotary-wing aircraft or man-carrying balloon.

‘It was considered that a meteorological balloon would be radar-significant and unlikely to be released in the area.

‘A glider could not be discounted but it was felt unlikely that one would be operating in that area, due to the constrained airspace and the lack of thermal activity due to low temperature.

‘Similarly, the board considered that a hang-glider or para-motor would be radar significant and that conditions precluded them.

‘Members were unable to reach a conclusion as to a likely candidate for the conflicting aircraft.

The pilot was clearly shocked and reported that there had been a ‘high’ risk of collision following the incident on December 2 last year.

He told his control tower: ‘We just had something pass underneath us quite close. Have you got anything on in our area.’

They replied: ‘Negative. We’ve got nothing on radar and we’re not talking to any traffic either’

The unidentified flying object passed directly beneath the plane before either of the crew had a chance to take action to avoid it.

Both pilots described the object as ‘blue and yellow (or silver) in colour with a small frontal area but that it was “bigger than a balloon”.’

The airline involved has not been identified by the report authors.

Several companies fly in Airbus 320 planes from the airport and they can seat up to 220 people – although the number of seats varies.

The report authors said they had not been able to work out what the object was. 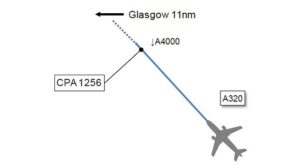 Near miss: A diagram in the report which shows the pilot’s direction of travel and the unidentified object which is marked as ‘CPA 1246’

They wrote: ‘The controller stated that he was not talking to anyone else in that area and that nothing was seen on radar. Search action was taken with no result and the A320 pilot stated his intention to file an Airprox.

‘Additionally, a further detailed review of individual radar sources did not yield any conclusive radar data that matched the A320 pilot’s description of the encounter.

‘The Air Traffic Control unit’s own radar replay also showed no surveillance traces in the immediate vicinity of the A320 at the time.’

Once on the ground the A320 pilot gave a further description of the event to the Glasgow Aerodrome Controller.

The pilot said: ‘We seemed to only miss it by a couple of hundred feet it went directly beneath us – wherever we were when we called it in it was within about ten seconds; couldn’t tell what direction it was going but it went right underneath us.’

Asked if he thought it was a glider, the pilot replied: ‘well maybe a microlight – it just looked too big for a balloon.’

But the board ruled out any such aircraft and were baffled.

‘Members were of the opinion that, in the absence of a primary radar return, it was unlikely that the untraced aircraft was a fixed-wing or rotary-wing aircraft or man-carrying balloon.

‘It was considered that a meteorological balloon would be radar significant and unlikely to be released in the area of the Airprox.

‘A glider could not be discounted but it was felt unlikely that one would be operating in that area, both due to the constrained airspace and the lack of thermal activity due to the low temperature.

‘Similarly, The board considered that a hang-glider or para-motor would be radar significant and that conditions precluded them, as they did para-gliders or parascenders.

‘Members were unable to reach a conclusion as to a likely candidate for the conflicting aircraft and it was therefore felt that the Board had insufficient information to determine a cause or risk.’

Do pilots believe in UFOs? Many of them do and here is my close encounter story