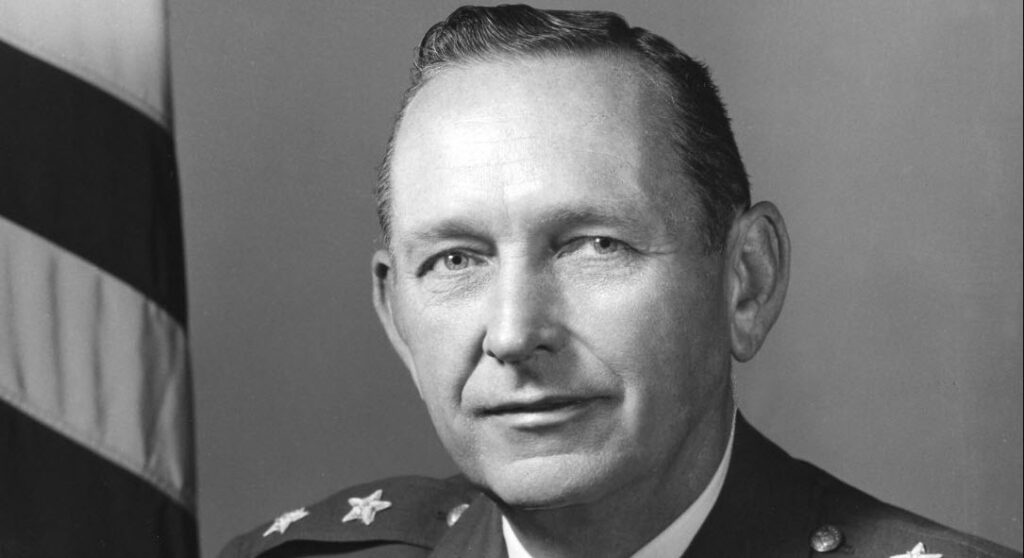 General Garland was born in 1916, in Barnesville, Ga., where he attended high school and junior college at Gordon Military College. During this period he served over four years with the Georgia National Guard. He graduated from the U.S. Military Academy at West Point, N.Y., in May 1942, and immediately entered pilot training at the Greenville Aviation School, Ocala, Fla. He completed pilot training and received his pilot wings at Turner Field, Ga., in March 1943, and completed B-17 transition training at Sebring, Fla., in April 1943.

During World War II, General Garland served with the 401st Bombardment Group stationed in England and flew 32 combat missions in B-17 bomber aircraft. In June 1945 he returned to the United States and subsequently was assigned to Davis-Monthan Field, Ariz., as commanding officer of the Davis-Monthan West Camp.

General Garland was transferred to Madrid, Spain, in April 1954, where he served in the Plans Section of the Joint U.S. Military Group and in November was named chief of staff of the group. In October 1956 he became chief of staff of the Sixteenth Air Force in Spain. He returned to the United States in May 1957, and was assigned to Lockbourne Air Force Base, Ohio, as deputy commander of the 91st Strategic Wing and later of the 376th Bombardment Wing.

General Garland entered the National War College, Washington, D.C., in 1961, and following graduation was assigned as chief of staff, Second Air Force, Barksdale Air Force Base, La. During the National War College assignment he obtained his master’s degree in international affairs from The George Washington University. From March 1964 to August 1965 he was commander of the 12th Strategic Aerospace Division at Davis-Monthan Air Force Base, Ariz.

The following is the UFO portion of Major General Garland’s oral history interview. Below, you will find the interview, as received under the Freedom of Information Act (FOIA), in it’s entirety.

A: Another thing and, once again, this is not the most important aspect. What was the status of the flying saucers when you were in SAF/IO? Did you ever find yourself standing up there and trying to say there are none?

G: Yes. I told them we had the little green men in a hangar at Wright-Patterson. (laughter)

A: You are the one who wrote that one? (laughter)

G: We were having about a thousand letters a month come into our community relations section on flying saucers, UFOs, so we decided we had to do something about it. This was not just SAF/OI. The Air Staff got involved in it. A guy named Randy Holzapple [Gen Joseph R. ], a lieutenant general, was involved in this sort of thing . We worked up a program to let the president’s Scientific Advisory Board get involved in it. We got about a million dollars from someplace and hired this fellow Dr. Condon, who at that time, I think, was at the University of Colorado . Before that he had been running the Bureau of Standards or something and a highly qualified and capable guy. We gave them the money. Our Systems Command people in the Pentagon drew up the contract with them. We didn’t handle it; we said, this is what we need to do. Here’s what we want. We want scientific, top technical people in the country to evaluate this problem. We want them to write a report in detail. We want them to give us a copy of the report, and at the same time we want them to give the press a copy of the report. We don’t want to know a damned thing about it until we see the final report, and we get it at the same time that the press gets it. You are going to have to monitor the contract just like you would monitor a contract if you buy an airplane. We don’t want anybody in the blue suit side giving anybody instructions on what to do. That is the ‘way it was handled. I don’t know’ if you have ever seen the report or not.

A: This is project Blue Book that used to be at Wright-Patterson. We used to have all that down at Maxwell.

G: It’s very interesting because in this study they went back to things like “Ezekiel saw the wheel ,” and they went back to your imagination. In other words , once you started shooting missiles and rockets, now you can imagine that you are going. Of the whole study though, it came out that a very, very high percentage, into the 90s, were explainable. You ended up with only 2 or 3 or 4 percent that were not explainable. In other words, we never questioned that an airline pilot saw something. We questioned what he saw, not what he thought he saw. Most of these things these people were able to reproduce. In a laboratory you could recreate the atmospheric condition, the lighting, and the shadows at that point in time and come up with an answer that the scientific community could accept.

Getting into the technical aspects of it , let’s just reverse the situation . If we are going to outer space, there are windows in which you go in, certain time period. You are going to go in these time periods, or you won’t have enough energy to get there. Then you can back that up and say, “If they are coming here, they are going to come in this time period. If they don’t come in that time period, then it is something else, and they couldn’t come. “It is like when you see an object going through here. You know you reach the speed of sound and you break the barrier. You can ‘t go at that speed of sound without breaking the sound barrier , whether you are round, square, oblong, or what. (laughter)

That quieted down the thing for a while. Then we had Major Kehoe, an ex-Marine, and Carl Sagan from Cornell, who is a famous TV character now. Kehoe made a living at this. He had a vested interest in it, so he kept the thing going. Sagan had a vested interest in it because he was trying to get us to put up the radio type things that you could send signals out or you could receive signals from outer space. He couldn’t understand why we wouldn’t sponsor all of his programs on that. He is a brilliant man, he is a good scientist. He is involved in NASA programs, but when you have a vested interest you can say, “Well, there might be something to it,” and then the next thing you know, you’ve got a big story and got a lot of people interested. It was one heck of a problem to quiet down.