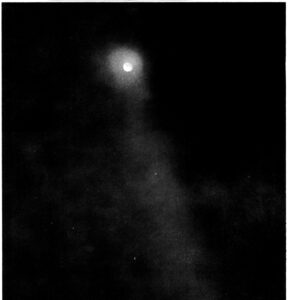 The Norwood Searchlight Incident of 1949

The following was written by the late UFO Researcher Kenny Young:

The Norwood Searchlight Incident of 1949, as it has been called, is an outstanding series of 10 visual sightings of a strange aerial object that took place in or near the Norwood, Ohio area from August 19th of 1949 to March 10th of 1950.
The alleged observation of a massive object by searchlight operator Donald R. Berger, and meticulously detailed in his logs, remain one of the more curious events in UFO history.

This case is exceptional not only because of the dramatic event reported, but also because of the caliber of witnesses involved. The series of incidents were said to have been witnessed by civilians, by clergy, by scientists, by police officers and military officials.

Photos were taken on October 23, 1949 by Norwood Police Sgt.Leo Davidson, and 2 reels of 25-ft. motion picture film were kept in the possession of Reverend Gregory Miller, last seen at WCPO Channel 9 TV studios in 1952.

Still frames from the movie film were given to investigator Leonard Stringfield and published in his book “SAUCER POST 3-0 BLUE.” That photo from his book was scanned and enhanced for this report. Using this same photo, an earlier analysis had been made by Dr. Richard Haines.

An additional photo was found in the possession of RAY STANFORD, who states: “This is several generations down from the original16 mm movie film, but it seems to rather clearly show that while the beam was projecting several degrees away from the object, when it got within a certain event horizon of the object, it was simply bent or ‘pulled’ the beam directly into the object, seemingly bending it about26.5 degrees, as measured in the photo plane! This frame has always amazed me since I first saw it in the mid-’50s. Several persons, back then, who had seen the actual movie said that at one time the object seems, indeed, to ‘suck’ the beam squarely into it!

“I have included two versions with special filtration. The second (middle) image makes the dramatic bend of the light beam especially clear and easy to measure (on the top of the beam). The second (last) version seems to show what might be interpreted to be a focus effect of the light within the beam. Note the dark diamond shape (bright in the original) between the object and the place where the beam bends.”

ORWOOD AND PROJECT GRUDGE
Could someone help explain if any reference to the 1949 Norwood Searchlight/UFO incident does or does not appear in Project Grudge files?

The Norwood case involves 10 visual sightings by multiple civilian, clergy, police, scientist and military witnesses over a 7-month duration, facilitated by the use of a powerful searchlight ran by Army Sgt. Donald R. Berger. The first sighting took place during “The Jitney Carnival” of 1949 and witnessed by hundreds The following morning, three local newspapers- The Cincinnati Post, The Cincinnati Enquirer and The Cincinnati Times Star- all had articles regarding ‘strange lights’ and ‘comets seen over the city’ from the previous evening.

There was an explanation for the occurrence, according to one local newspaper. The Albee Theater in nearby Cincinnati, accompanied by the Ss. Peter & Paul Church in Norwood, were operating searchlights. It was said that the hundreds of persons calling newspapers and weather bureau officials were simply observing these searchlight beams ‘bouncing off of clouds.’

Despite this, the sightings began in earnest after 11:00 p.m. (Berger logs indicate that he observed the UFO from 8:15 p.m. to 11:00 p.m.) and continued to flummox Cincinnati residents until 6:30 a.m. the following morning. It seems unlikely searchlights would be operating all night long until daylight, and further still, one weather bureau official recounted his early-morning observation of two objects that looked like “two weather ceiling balloons” that weren’t moving despite a wind speed of 25 to 32-miles per hour.

Even the Berger logs indicate the possible presence of a second searchlight from that evening, whether Berger knew there was another searchlight at work or not. “When I moved the searchlight away, the object continued to glow,” Berger wrote in his 1949 logs that were later kept in the possession of Rev. Gregory Miller until 1954, when he imparted them to UFO investigator Leonard Stringfield.

Meanwhile, during the festival in Norwood, Robert Linn, the managing editor of the Cincinnati Post, along with church pastor Rev. Gregory Miller, were certain that Berger’s searchlight had found and been bouncing off of “some definite object.” They entered into agreement and reported the situation to intelligence officials at Wright Field in nearby Dayton, Ohio.

The August 19th episode is a mass-witness case, reported in all three local newspapers of Cincinnati, Ohio, a city not far south of Dayton, home of the airbase. A possible explanation is publicly toyed with: the deception caused by two searchlight beams strolling the dark skies. It seems as if Grudge folks would have likely been aware of the events at Norwood on August 19, 1949 – either from all the reportage or from the direct report to the airbase itself, by Robert Linn and Rev. Miller. Why does the Norwood Case not factor in to their investigation when, in fact, far ‘lesser’ cases may have been prominently addressed? If Project Grudge had sought to dismiss UFO sightings as psychological phenomena, they had a good case with the Norwood searchlight events at this stage of the situation.

NICAP has published the following on this case, and it is archived here for additional information:

Francis Ridge:
This is one of those older cases that doesn’t show up very often in the literature. And most people really don’t understand what happened in Norwood in August of 1949, or especially in the month of October. This wasn’t a cloud or weather balloon caught in a searchlight. It was much more complicated. The following is from the NICAP UFO Evidence (1964), page 88:

If you want the full story, you need to read what Leonard Stringfield, himself, reported in his publication, “Inside Saucer Post. . .3-0 Blue.”