On June 13, 2017, the following statement was released on http://www.midnightinthedesert.com:

“Heather Wade received documents last night from a trusted source. She immediately had Stanton Friedman take a look at these documents who said, “I have never seen anything like this, this is new MJ12 information.” Stanton Friedman is going to continue examining these documents for authenticity, but at this time we can find no evidence of forgery. Midnight In The Desert is posting these documents for all to see, and should you refer to these pages publicly IN ANY WAY, you must credit Heather Wade and Midnight In The Desert as the original source.”

Many have asked what I thought, and although I do not like to just blindly dismiss certain “revelations” that may come forth, I have a long laundry list of issues with these documents.

To see the documents in their entirety, they can be viewed at the bottom of this page.

Sadly, there are no documents that appear remotely close to the way these are displayed in the realm of REAL or guaranteed AUTHENTIC. The designation of “TOP SECRET” should be clearly marked on the TOP and BOTTOM of each page, and generally, with highly classified information, there is a codeword that follows “TOP SECRET,” for example, “TOP SECRET UMBRA.” (Please note: The security classification does not always appear on the top and bottom – but in many cases – it will. This isn’t a definite sign of a hoax, but it doesn’t help, in my book.)

To offer an example, TOP SECRET UMBRA was the designation for the UFO related “COMINT” reports found at the National Security Agency (NSA). Here is an example of one of those TOP SECRET designation stamps:

This is a big red flag in my book, and generally, a no-brainer to show this is a HOAXED document.  If a document leaks from “the inside”, one can assume it is in the form that did not go through any declassification process.  In this case, since the document is labeled “DO NOT DISSEMINATE OR DECLASSIFY” we can safely assume, that process never took place, or never would have taken place.  So, this is, “The Original.”  In other words, how the President, and whomever else might have “need to know” access, saw the document.

The President of the United States, however, would NOT be given a Top Secret briefing document, with information redacted or in this case, stamped out “CLASSIFIED.”  This simply, would not happen — especially in the late 1980s when this document was created. Document handling procedures were decades in effect, and this element in the document would not be there.

If this is truly a hoax, one can see that the hoaxer probably went to the 1990s, grabbed a UFO buzzword like Project Aquarius, and slapped it in this document. Problem is, I researched Project Aquarius many years ago, and it is nothing close to what this MJ-12 document (or the past references to it) allege.

Here is a screen shot of the official PROJECT AQUARIUS documents I was able to get declassified. The program is about ocean surveillance – not aliens.  Why is this important?  Because generally, project names are never repeated.  So, the likelihood that a TOP SECRET Project Aquarius exists (other than this SECRET one discovered and described below) is pretty nil. 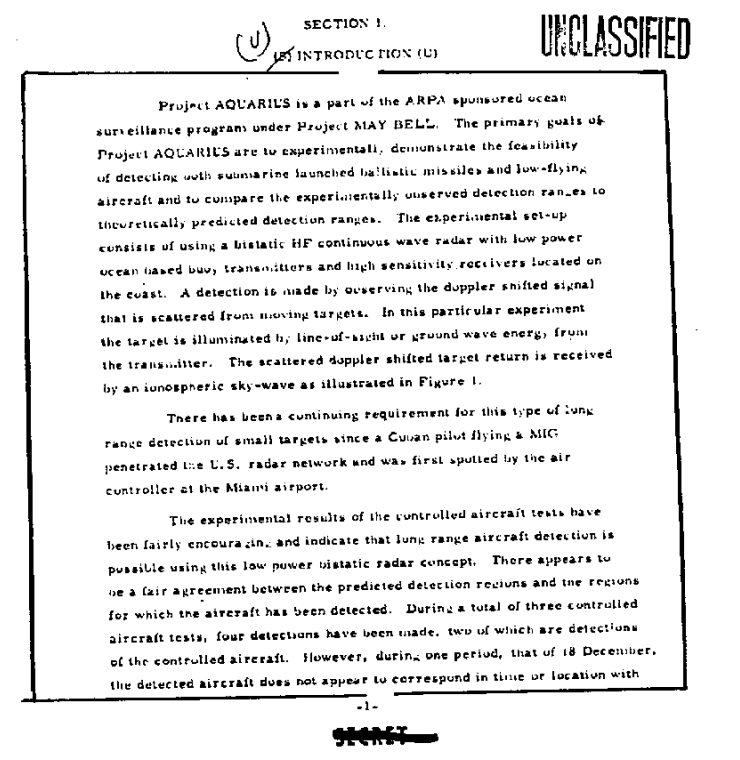 The interview with the alien just reads too much like fiction, a joke or just a writer trying to input too much politics.

Could you really imagine an alien saying what (s)he did, the way (s)he did? None of that part, on an intellectual level, makes sense. But beyond that, neither do the “facts.”

“Almost fifty years ago, you sent us signals. You were looking for us, and you scared us with a signal you should not have been capable of sending. So we answered.”

50 years ago? From where? The interview transcriptions were said to have been taken from interviews conducted April 1948 to March 1949, as done with the Extraterrestrial Biological Entity (EBE) captured at the Aztec, New Mexico UFO crash site on March 25, 1948. So, using that date, this would put humanity sending a signal, attempting to contact aliens, in the late 19th century, circa 1898.  This statement alone is wildly inaccurate.

The strongest signal that had the intent of contacting aliens, was first sent in November of 1974. It was known as the Arecibo Message.  It was sent from the Arecibo Observatory, and blasted to a star system that was overhead during the time it was scheduled, specifically, Globular Cluster M13. M13 is 25,000 light years away from Earth, which means, the signal would take approximately 25,000 years to get there (if it got there at all).  The return message, would take another 25,000 years.  That time frame, obviously does not coincide with this data.

Carl Sagan’s “Contact” popularized Adolf Hitler as the first “signal” when the 1936 Olympics were broadcast from Berlin, Germany. Some theorized that this strong signal would leak into space, and someone might pick it up.  However, that has largely also been debunked, since although the signal strength was strong for the time, it was not strong enough to reach into the Cosmos to any of our galactic neighbors.

There are many statements by the EBE in the “transcript” that can be dissected, but I think for the reasons outlined above, this is not necessary.

I believe the date formatting is another issue in this document. The dates, as listed, do not coincide with how documents were written not only at the time, but to this day.

Here is an example from the document, which claimed to have been prepared in 1989:

Then a few pages later, in the same briefing document, the date formats differ and have dashes (-) and commas (,) where there shouldn’t be.

Here is an OFFICIAL/AUTHENTIC declassified document, also written in the 1980s, which formerly had the classification SECRET, which shows the standard date formats used by the Defense Intelligence Agency, the same agency that allegedly created these MJ-12 papers.

Until further information is presented — The Black Vault is labeling this document a HOAX.