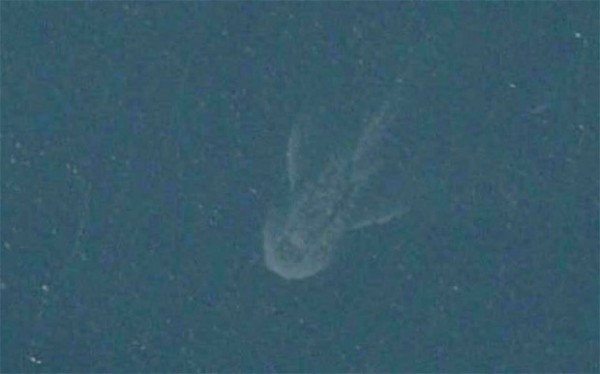 By Zachary Davies Boren, The Telegraph

Since its inception in the sixth century, the legend of the Loch Ness Monster has endured unreliable sightings, doctored photos and faked footprints, but a mysterious satellite image has given fresh hope to believers of the elusive Scottish sea creature.

The image, taken by an Apple map satellite, depicts a shadowy form of around 100 feet in length with something akin to flippers in the water of the Loch Ness.

“We’ve been looking at it for a long time trying to work out exactly what it is,” Gary Campbell, president of the Official Loch Ness Monster Fan Club, told the Daily Mail.

“It looks like a boat wake, but the boat is missing. You can see some boats moored at the shore, but there’s one here. We’ve shown it to boat experts and they don’t know what it is.”

After studying the image for six months, and with apparently other obvious explanation, the Club has concluded that shadow is probably the Loch Ness Monster.

“Whatever this is, it is under water and heading south, so unless there have been secret submarine trials going on in the loch, the size of the object would make it likely to be Nessie,” Campbell said.

One of the spotters, 26-year old Andrew Dixon from Darlington, said: “It was a total fluke that I found it. I was looking at satellite images of my town and then just thought I’d have a look at Loch Ness.

The first that came into my head when I saw it was, ‘That’s the Loch Ness Monster’.”

This supposed sighting is the first reported in 18 months, the longest that Nessie has been missing since 1925. All three sightings of the monster in 2013 were all found to be as fake – one was a duck, one was a wave and one wasn’t even taken at Loch Ness.

Source and special thanks: The Telegraph

This is what I found regarding the case file with the same name.

First, I enhanced the image…

…then searched for boats of Loch Ness and found this one…