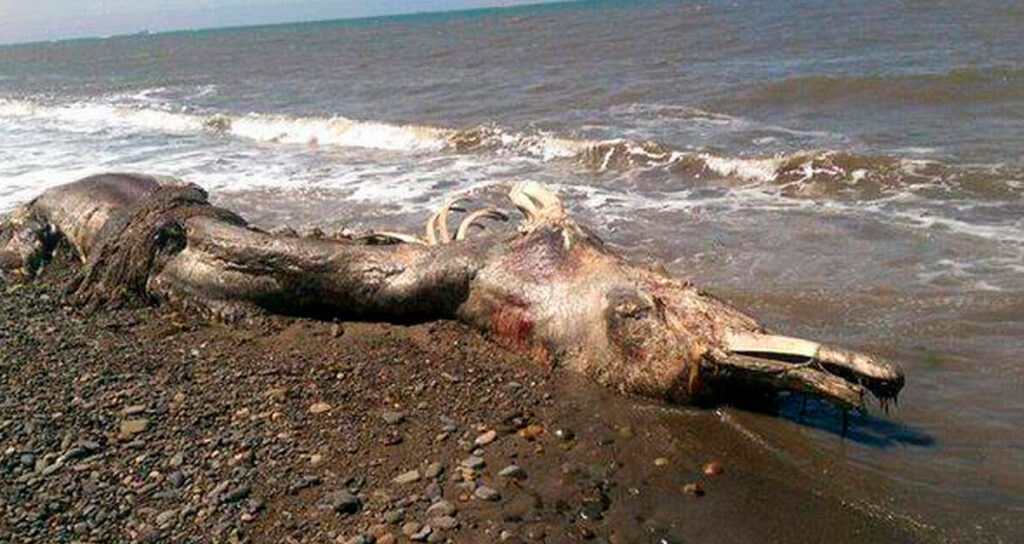 The enigmatic remains of a giant marine animal with a furry tail found in Russia’s Far East have puzzled locals and social media, but scientists have managed to identify the odd creature.

A mysterious sea animal washed ashore near the airport at Shakhtersk on Sakhalin Island this weekend, Sakhalin Media web portal reported on Wednesday. The remains, a few meters in length, featured a furry tail and a huge nose, making it very difficult to identify the creature.

Social media reacted to pictures posted online with a variety of explanations for the appearance of a never-before-seen creature in Russia. While it reminded some people of an ancient dinosaur, the most popular guess was that it was a Ganges River dolphin from India.

“Probably, our summer is so cold that even the Indian Dolphins getting into local waters are covered with fur,” a commentator joked.

However, according to experts, it would be impossible for a fresh water dolphin to survive the swim in the salty ocean. Besides, they don’t have any fur and are smaller in size.

“We have gathered a group of scientists. We studied all the versions and came to the conclusion that the fossils found ashore belong to a whale cub,” Nikolay Kim, Deputy Head of the Forecasting department of the Sakhalin Research Institute of Fisheries and Oceanography, told Sakhalin Media.

Kim added that the cub must have been a giant beaked whale, a species that is quite common for the region, so the discovery is a“no wonder.” Besides, all dolphins and whales are born with a hair coat that disappears with age.

Berardius bairdii, also called “giant bottlenose whales,” is the largest of all beaked whales, reaching up to 12 meters in length, and found in the North Pacific. It is listed in the Convention on the Conservation of Migratory Species of Wild Animals (CMS).