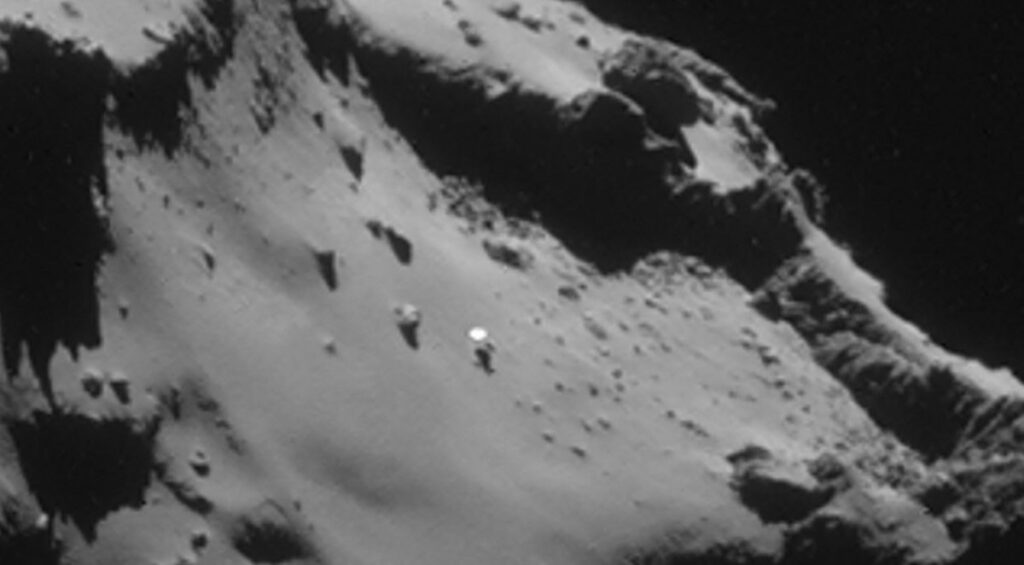 What are we looking at? A mysterious object has been photographed by the spacecraft Rosetta, and experts have yet been able to give an explanation.

Sitting on the surface of comet 67P/Churyumov-Gerasimenko, is an object that many truth-seekers say, does not belong. When compared to the rocky outcrops that surround it, there appears to be no similarity, despite being in the same light casting the same shadows at the same angle.

This celestial anomaly even shows signs that the it is reflecting the sunlight back into Rosetta’s camera lens, very much like a metallic object would.

The photograph was taken on September 10th, and released by the European Space Agency (ESA). It’s caption reads:

Four image NAVCAM mosaic of Comet 67P/Churyumov-Gerasimenko, using images taken on 10 September when Rosetta was 27.8 km from the comet

Could this be an artificial structure caught on camera?  Or, is it just like NASA wants us to believe about the “Face on Mars,” a trick of lights and shadows?

A member of The Black Vault, MFranklin, decided to take the case file, and analyze the highest resolution photo available. His analysis was uploaded to the image gallery, and can be downloaded (higher resolution) below. It appears that the unknown object is floating above the surface of the comet.

Of course, it could be a trick of lights and shadows.