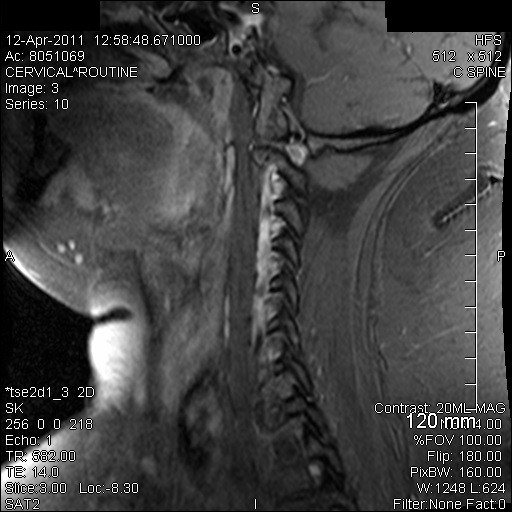 Note from The Black Vault: A gentlemen wrote to me at The Black Vault about a mysterious object discovered during an MRI.  After it’s discovery, they are eager to see if others out there have experienced the same thing, in connection to unexplained encounters, because it does sound like her mother has had some experiences.  Read the below short interview, and then check out the MRI image.

How did you discover the mysterious object?

My wife was in an MRI and they pulled her out of it to ask if she had ever had any shrapnel for metal fragments left in her body from an accident. She had not. What they had found was a weird anomaly, a t shaped piece in the attached image.

What exactly are we looking at on this image?

It is the t shaped object in the right of the MRI scan, about half way down. It kind of looks like a nail but is barbed up and down the object. I googled t shaped alien implants and others have had similar objects.

Has your wife experienced anything strange or unusual?

None that she knows of. But her mother had a very definitive experienced urging the Hudson Valley sightings of 1984. Missing time, and a weird scar on her body among other experiences. The missing time incident was her mother. She encountered a UFO with my wife’s cousin and one of her cousins friends during the Hudson Valley sightings. They were gone from my wife for three hours, but thought they were only gone for a half an hour. After that my mother in law had repeated abduction dreams and a mysterious burn scar. I had heard this story many times which peaked my interest when this anomaly was discovered in my wife’s neck.

I’ve read that they can follow a family line with abductions, which makes me concerned for my daughter. As for what we are seeing here, I have no idea. All I know is she was in the MRI getting tested after an auto accident we had. They pulled her out of the test because of that object. They thought she might have had some piece of shrapnel that was left in her body from the accident. But neither of us were cut in the accident. And she had never had a wound in her neck and head area that had left anything external in her body. It is truly an anomalous object.

Are you currently having anyone look at this further, other than The Black Vault? Would you want it taken out?

I have nobody else looking at this other than The Black Vault. If we could figure out what it is or if it is having an adverse effect, then we would think about taking it out.

What does your wife truly feel the object is? Strange anomaly? Or coincidence?

As for what it is, my wife really has no idea but is curious to figure out the mystery. There are other images of it from the MRI but this was the clearest.