The following report is from UFOs NorthWest, and is used on The Black Vault with permission.

Description: The witness called the morning after his sighting. He was outside and heard a loud sound. He saw jets coming from the west. The jets were pursuing erratic flying lights. More lights appeared and the witness estimated the number at 15 to 30. More jets joined the pursuit. The activity continued for 30 to 40 minutes. The activity was eventually lost in the Northeastern sky. The witness called 911, but was not given any information about his experience. The witness also added that he was in Roswell earlier in the day and skies were mostly cloudy. He saw what he thought were military helicopters moving in and out of clouds as if they were looking for something. The witness is a pastor for a local church and a Marine Corps veteran. He has lived in the area for about five years and has never seen anything like this.

Summary Report Sent by Witness: What I saw last night has convinced me beyond any doubt that we are not alone and have much reason to be concerned: June 10th 11:40 PM, Alto, NM Military Confronts Massive UFO Flap.

Update – July 26, 2015: The radar data received from the FAA have been found to have been “redacted” in the sighting area.

Update – August 27, 2015: Kudos for the FAA. I contacted the FAA and they provided the missing data that I had thought they redacted.  The FAA is to commended for their prompt response.  There are many military operation areas (MOA’s) in this area where classified military activities are conducted so I was somewhat surprised that I received the data.

Update – Oct 10, 2015: The radar report has been completed.  Radar shows a concentrated area of returns to the Northeast of the witness location.  This is where the witness said that the UFO activity “moved to.”  The area also shows presence of several military aircraft that were later observed returning to Holloman AFB. Click here to read the radar report.

Update – Dec 5, 2015: We have received a response to our FOIA from Holloman AFB inquiring about aircraft that were in the air at the time of the above sighting. Click here to view the report documenting F16 activity in the UFO sighting area

Update – Dec 9, 2015: I had a second interview with the witness. The witness said that the jets returned the following night (June 11, 2015).  The log obtained from Holloman AFB confirms that jets were in the skies about the same time and for the same length of time as on June 10.  The witness stated that the jet and UFO activity continued nightly for two months and abruptly ended on August 10, 2015. This new information suggests that the Air Force may have been performing routine operations, but it is still mysterious on why they would do this outside of a MOA. A search of UFO databases for MUFON and the National UFO Reporting Center did not reveal any additional reports in the area. The witness stated in his second interview that other locals had seen UFO’s, but none have reported them.

Special Note – July 30, 2015: The FAA was contacted in an attempt to fill in the “missing holes” in the radar coverage noted in the report below. Updates will be posted.

Update – August 27, 2015: The missing data has been received from the FAA. The FAA is to be commended for sending data in an area where classified military operations are conducted.

This is a special report. In the late evening of June 10, 2015 near midnight in Alto, NM a local minister saw military jets pursuing 30 to 40 erratic flying lights. The witness called 911 as the result of the sighting, but was given no information. Click here to read witness report. A look at the updated radar data shows considerable activity from military jets and several concentrated patterns of primary (possible unknown returns). The complete radar report follows. 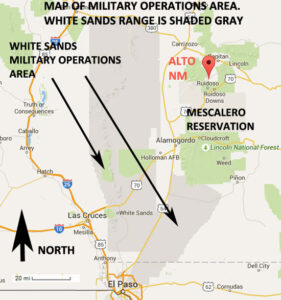 Some ground based military maneuvers are conducted in Otero County (at an unknown location). Alto is outside of Otero County & White Sands Missile Range (see map below):

There is a long range ARSR-4 radar sensor in Eagle Peak, Texas which is about 150 miles from Alto. This radar has a range of 250 nautical miles. Radar from this sensor and a short range (60 nautical miles) radar in Roswell were used to evaluate radar returns in this analysis. (See map below):

Military craft appear to the NE of witness location at 11:15 PM. (This is the start time of the radar data dump. The craft were likely in the area beforehand.) Military craft were seen approaching Holloman AFB at 11:53 PM. They likely landed not long after this. This location (to the northeast of Holloman AFB) was at the southern edge of the radar request area. (See radar map below for path of “likely” military aircraft.)

Radar showed a dense concentration of primary returns to the Northeast of the witness location. Many of these returns were likely military aircraft, but some of the returns could very well have been UFO’s. Targets were moving at very rapid speeds (near speeds of aircraft).  (See map below):

The radar map doesn’t completely agree with what the witness viewed. The witness says that he first saw military aircraft approaching from the West. Radar does not show this. However, the witness says that the activity moved to Northeast of his location where it continued for some time. The radar definitely confirms this. It shows considerable military activity and a dense concentration of primary returns. Some of these primary returns could very well be the UFO’s (lights) seen by the witness. (See map above.)

The radar shows military aircraft flying in circles through the area north and east of the witness location before returning to Holloman AFB. This activity is well outside of any MOA’s. (See above maps.) Why would the military be present in considerable numbers and considerable time outside of any MOA’s? The witness has lived in the area for several years and has never seen UFO’s or a strong “military presence.”

All of the military craft and “UFO” returns were outside of MOA’s. Aerial operations (and missile launches) are normally conducted within the White Sands MOA. Some special ground based maneuvers are sometimes conducted in Otero County. Alto, NM is outside of both of these areas. A “heavy” military presence was noted by radar returns in the area and at the time the UFO’s were sighted by the witness.

F-16s Confirmed in the Area

The document above shows F16 take off and landing times of F16 aircraft out of Holloman AFB. Pertinent aircraft are highlighted in yellow. Further investigation indicated that the same number of sorties were dispensed about 24 hours later for similar time periods. However, it is not known where these were sent.