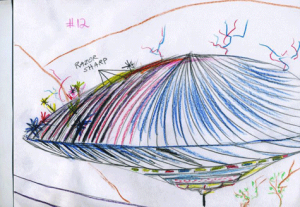 Drawing of Ship by Witness

Description: Witness stated that he was driving eastbound on Highway 50 (see map above.)  He noticed four lights to his left (towards Virginia City and Reno.)

The next thing that he remembers is driving eastbound into Dayton and it is 8 am.

(The distance traveled was only a few miles – see map above.) He lost about 9 hours of time.  He remembers very little in this 9 hour time period. )

Investigator’s Notes: The witness said that he was dramatically affected by this encounter.  If his account is true, it would be easy to accept this statement.  The witness made several drawings of the craft and several of the beings that he saw with the craft.

He stated his experience in considerable detail.  I doubt if anyone would go to this trouble just to tell a hoax.  The witness has asked for complete anonymity and has not requested any compensation.

I think that the witness may be truthful, but like most encounters of this type the validity of the case lies solely with the statements of one witness.