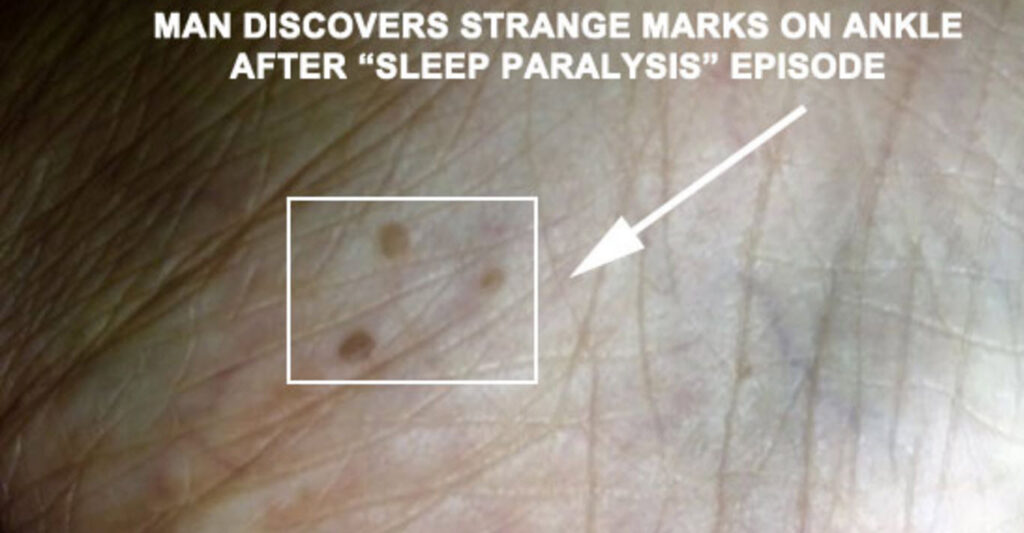 The following case was submitted to UFOs NorthWest, and is used here with permission. It can not be reproduced in any way, without permission.

I was doing a little research and came across your site having somewhat similar markings as your readers. I remember some time last year where all of a sudden I had thought I had gotten bitten by an insect near my ankle because of the inflamed irritation.

After several days of constantly itching my ankles I had started to really take a look down at my ankles and noticed 3 red raised marks which later the irritations subsided. It now appears to look like 3 raised scars that are perfectly triangular in shape.

I have had many sleep paralysis moments through my childhood years till present and have seen at least maybe 7 UFO encounters through out my life time. Maybe I might be getting a little paranoid but I’m starting to think something is happening. I have attached an image of my ankle.

I believe I first noticed the marks some time in June or July of last year 2015. I thought I had got bitten by fleas and was profusely scratching my ankle. No I don’t recall anything unusual, but I do remember arguing with my significant other the night before and I decided to sleep in my living room instead of my master bedroom. I do recall having sleep paralysis that early morning though while laying on my couch.

It is right besides a large sliding glass door to the balcony. I live right across the way and I’m overlooking the double tree hotel out in the Balcony area and can’t imagine being pulled through my balcony or through ceiling walls as there are neighbors that live above me. There are people out there during odd hours through the morning coming and going from the valet area.

I had just moved into the metro area some time in Mid May. When I was living in Irvine, it was more secluded having an enormous hill facing west of my complex. I used to live right next door to the Verizon amphitheater in Irvine, CA. While swimming late one night I have seen 2 Unidentified Lights hovering in the night skies and later ascending straight up.

Note from The Black Vault:  There are some explanations for this, and the obvious one, would be simply they are “moles” that were previously unnoticed, or recently appeared on the body.  There are many instances of abductees exhibiting marks on their body (that look similar) along with other scoop marks, scratches, etc.

Is this one of those cases? The triangle pattern, although interesting, can also be explained by the fact that three dots will always be a triangle, no matter their position, unless they are in a straight line. So, is the fact they are in a ‘triangular pattern’ important for an investigation? Possibly.

I would be interested to hear a dermatologists point of view.