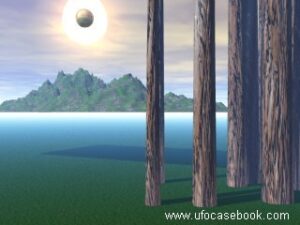 Artist rendition of the sighting.

The term “flying saucer” was made popular by a journalist covering Kenneth Arnolds’s sighting of nine flying disks in June of 1947. The journalist misquoted Arnold, who did not describe the objects as saucer shaped, but describes their strange movement as similar to a saucer thrown on water and bouncing several times: they “flew like a saucer would if you skipped it across the water.”

But a Texan farmer, John Martin, used the term “saucer” 69 years earlier to describe the flying object he saw on a hunting expedition in the surroundings of Denison, Texas, on January 2, 1878. In this case also, “saucer” does not refer to the shape, but to the size of the observed object, as its shape was described as that of a balloon. John Martin saw the dark object high in the Southern sky. He first noticed it to be about the size of an orange, that grew in size as it got closer to him. After he had to rest his eyes, it had increased considerably in size and appeared to be going quite fast. When it was over him it was the size of a large saucer and at a great height.

Because this UFO was dark, and not a mysterious light, reflective, or silvery, many scientists believe he saw a solid object against the sky, with the light behind it.

The sighting was reported by the local newspaper Denison Daily News on January 25, 1878, with the title “A Strange Phenomenon.” The article was a first-hand report from the farmer, and its full text is:

“From Mr. John Martin, a farmer who lives some six miles south of this city, we learn the following strange story: Tuesday morning while out hunting, his attention was directed to a dark object high up in the southern sky. The peculiar shape and velocity with which the object seemed to approach riveted his attention and he strained his eves to discover its character.”

“When first noticed, it appeared to be about the size of an orange, which continued to grow in size. After gazing at it for some time Mr. Martin became blind from long looking and left off viewing it for a time in order to rest his eyes. On resuming his view, the object was almost overhead and had increased considerably in size, and appeared to be going through space at wonderful speed.”

“When directly over him it was about the size of a large saucer and was evidently at great height. Mr. Martin thought it resembled, as well as he could judge, a balloon. It went as rapidly as it had come and was soon lost to sight in the heavenly skies. Mr. Martin is a gentleman of undoubted veracity and this strange occurrence, if it was not a balloon, deserves the attention of our scientists.”

Of course, old reports somehow lack in accurate information, and no witness interview is possible to get the missing information or check the witness reliability. But these old reports exist, and even lacking of clear data, they sometimes cannot be easily interpreted in terms of commonplace phenomenon.

Who knows? Maybe some even older report can still surface, where a UFO is described as “saucer” – like in some aspect.

written by B J Booth

Two Men See Several Lights Ascend From a Nearby Forest

Orb Photographed over the Pyramids at Giza, Egypt