By John Greenewald on April 29, 2015 0 Comments
Video - Possible Bigfoot in Utah Puts Hikers on the Run 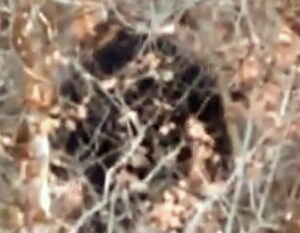 Close up and Cropped.

The video above was posted on YouTube, and has received millions of hits since it was uploaded. It holds the following caption from the witness:

Our possible Bigfoot sighting:
We went camping in Provo Canyon (near Squaw Peak and Little Rock Canyon Overlook) and saw some deer up on a hill that we wanted to get a closer look at. On our way up, we thought we saw a bear, until the monster stood up and looked right at us. We ran straight to the car after that, leaving our tent and everything behind. It’s probably all still up there.

We don’t know if this was Bigfoot or what we saw, but it could have been Bigfoot.

Copyright © 2012 by Beard Card. All Rights Reserved
Any reuse of this video must be done by written consent from Beard Card.

In addition to what was on YouTube, the following was published on November 4, 2012, by GrindTV

When the black bear you think you’re looking at from a safe distance suddenly stands and begins to resemble bigfoot, and that creature stares directly at you, how do you react? The hikers who captured the accompanying footage recently in Utah’s Provo Canyon seemed to act appropriately: They bolted through the woods, with the camera still running, to get as far away from the creature as possible. “We ran straight to the car after that, leaving our tent and everything behind. It’s probably all still up there,” states Beard Card, the YouTube user who posted the video. This is one of the more realistic Bigfoot escapades in some time.

Naturally, skeptics are analyzing the video in the hopes of finding an explanation. Yet even healthy cynics are pretty impressed with what they see. They note that the witnesses don’t appear to be acting. If they were, the skeptics say, they’d likely be a lot more vocal, and fall into the overacting trap. They also didn’t stick around to get a great shot, which also rings of a very natural reaction, but didn’t help when it came to capturing a better image.

Nevertheless, the shot of what clearly looks like the animal’s big broad arms is extremely compelling, which is why Max Roth of Fox 13 caught up with Beard Card to talk about the incredible encounter.

Card told Roth how they were standing there for a good chunk of time even before recording what they believed to be a bear at the time, while he was trying to get the camera to work. During their exchange, Card hit on their reaction. Here are a few excerpts.

CARD: “But when it stood up and looked at us–and we assumed it was a bear up to that point–but, when it stood up and looked at us, it was this massive animal. We don’t know what it was. I mean, none of us believe in Bigfoot, so. …We’ve talked about it over and over again since Monday when it happened and all of us are positive that thing wasn’t a bear.”
ROTH: “You’re not a Bigfoot guy?”

CARD: “Nope…none of us have ever believed in that kind of thing.”

CARD: “I don’t know!…We don’t know what it was…I don’t know if Bigfoot exists or not but that was a huge animal.”
Below is an enhanced version of the video.

Whether this is an elaborate prank, or something really scary we don’t know for sure. But for the full interview with Card, and more debate on the incident, it’s hard to beat the Bigfoot Evidence blog, where believers and non-believers routinely square off.

Enhanced and Slowed Down video