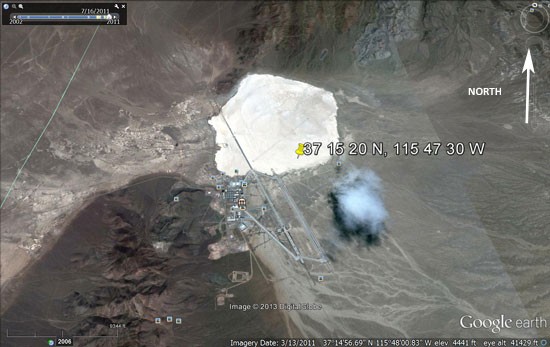 By John GreenewaldMarch 12, 2015No Comments3 Mins Read
Description: I was searching the historical imagery of Area 51 to view the progress of new structures. The cloud casting a shadow from a northern sun caught my attention. That fake cloud is the “smoking gun” that proves that particular image has been modified. It’s simply impossible for shadow casting to occur from a northern sun at that location. It can’t be debated or explained as anything else other than photo tampering, as the laws of physics of the solar positions relative to time and location are a scientific fact. If you search the historical imagery you’ll find other clouds casting a shadow from a southern sun, which is correct. Although in some cases these clouds appear suspicious as they cast pure black shadows when they’re near Area 51.I have also found some unusual shape changes of Papoose mountain (part of Area 51) using the historical imagery. The mountain seems to shrink and grow, vertically and horizontally, in some places. In this case I believe the shape changes are due to either sloppy Photoshop rework or possibly just overlapping photos from different angles. It’s not conclusive.

I’m not convinced the mountain shape has actually changed, as that could be observed with telescopes. I’m sure the actual images of Area 51 are much different than what we see on Google Earth imagery.

Note: The above report was written by Photo Analyst David Mason. UFOs Northwest thanks him for this report. Through additional research I found that the same “artificial cloud” appears on a Google Earth image taken on June 28, 2010. The fact that the same cloud shows up on two individual Google Earth images taken nearly a year apart adds gravity that the cloud is not real and is a fabrication. The question is: What is the cloud concealing? Is it concealing a crash? As Dave Mason points out the sun doesn’t shine from the north in the northern hemisphere. The cloud measures two miles north to south and about one mile east to west.

Weather Conditions: It is not known the time that the images were taken. On Mar 13, 2011 a check of weather at Nellis Air Force Base showed that skies were clear for most hours of the day. There were a few clouds measured at 17,000 feet for some hours. Some clouds were first reported at 2 PM, but the next clouds were not seen until 6 PM. The cloud in the above photos probably is much lower than 17,000 feet. On June 28, 2010 a few clouds were measured at 10,000 feet later in the day. Skies were totally clear for most hours. On June 28, 2010 the clouds did not appear until around 6 PM. Satellite photos are generally taken earlier in the day when the sun angle is higher.