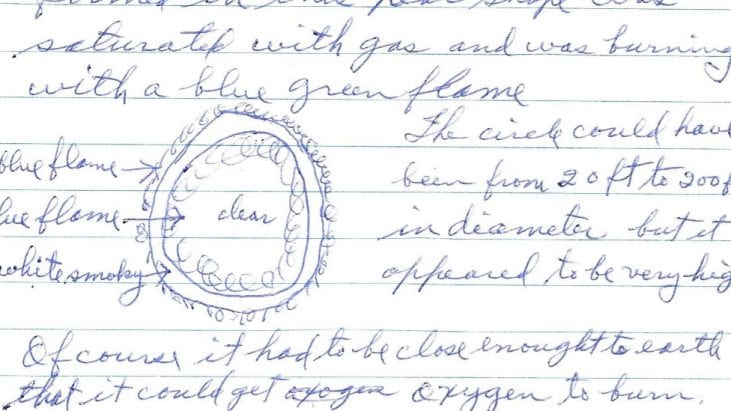 I was recently scanning in documents from the Project Blue Book collection I received a few years ago to share on The Black Vault (see From The Desks Of Project Book). This allowed me to take the time to closer inspect some of the items that previously, I had only glanced at. The following three-page, hand written letter was stapled together and folded among a stack of other correspondences.

The letter was written to Project Blue Book in 1969 from a then 71 year old man named James T. Kirk. It was regarding an event he had witnessed in the 1920’s while walking to work in Phoenix, Arizona. I looked for an official case for the story in the Blue Books archive. The case list from May 1969 showed an “additional reported sighting” non-case, Red Bluff, California May 24. The letter was sent from there dated May 21.

I have just finished reading your 1969 True Report on Flying Saucers No 3. It has brought to mind, something I saw back in the twenties. I worked at two different times between 1925 & 1929 for John F. Barber Producer Co. on Jefferson St. (ave) near Central Ave in Phoenix Arizona. We started work on the 3 – 4 – or 5 o’clock shifts. I lived about seven blocks east of the Produce house.

On the 3 or 4 o’clock A.M. shift one morning when I was about half way to the job there was a sudden very bright flash of light which held. I faced the north, and at about 2 and some ten degrees north of where I stood I saw a sphere-shaped circle of blue fire. I have never been able to remember if I heard an explosion but would have if it had been loud.

It looked as though a large cotton rope about one foot thick and formed in this sphere shape was saturated with gas and was burning with a blue green flame. The circle could have been from 20 ft to 200 ft in diameter, but it appeared to be very high. Of course, it had to be close enough to earth that it could get oxygen to burn. I walked backward the 3 or 4 blocks on to the store watching the burning circle. This walk probably took six to eight minutes and when I went indoors the circle was still there, was still burning, but not so brightly. It appeared to have turned over 2 or 3 degrees to the left. There was no wind, no clouds a perfect clear night.

I believe it was a meteor, but do meteors burn that long after an explosion? What kind of fuel was burning and why wasn’t it all consumed at once. Some years ago I asked Mr. (possibly) Nininger of Sedona Arizona (meteorologist). His reply was I had seen a meteor fall. This never satisfied me, hence this letter.

Sorry I don’t know the year, the month, season or day. I looked for comments in the Phoenix papers and talked to other men. It appears there were no other witnesses.

Would appreciate your comments on this.

Internet searches with the date and witness’ name revealed a one-line description on several sites. They mentioned a person named Kirk that saw a nocturnal light in Phoenix in 1920. The source was book by Eberhart, George M titled A Geo-Bibliography of Anomalies. Unable to find his book, I reached out to the author to ask him his source. Mr. Eberhart informed me that all he knew about the incident was that the observer was named James T. Kirk, and he saw a nocturnal light in the 1920s in Phoenix near Barber’s Produce Market. His source was: Jerome Clark and Lucius Farish, “UFOs of the Roaring 20s,” Saga UFO Report, Fall 1975, pp. 48, 60.

He no longer had the issue, and I suspected it would be difficult to find. He was correct, I have spent a few weeks looking all over the web for the issue with no luck. I don’t know for certain whether Blue Book shared the information, or the witness contacted someone else. It’s even possible that J. Allen Hynek had a copy of the letter. This copy appears to be an original.

I have no idea if Blue Book ever got back with Mr. Kirk and there is not much that can be done to research this apart from looking for other witnesses. Newspaper searches from the time showed no other mention of the event. With the name of the witness matching that of a fictional character, I researched it through census records and found him to be real.

I myself enjoy reading about old cases like this, especially regarding sightings before rockets, jets and satellites. They are even better when sketches are involved.

From the Desks of Project Blue Book: Mosinee, Wisconsin, 29 May 1968

Originating Organization: From the Desks of Project Blue Book