Deciphering the WOW! Signal of 1977 Using ASCII to Binary Conversion

This information was sent to The Black Vault and is used here, with permission. It can not be reproduced in any way, without prior permission by the author.  The Black Vault makes no claims about the validity, or meaning, of the below information. It is added here for reference, and for public scrutiny.

This was the letter I received from Italy (edited slightly for grammar/spelling but did not change context):

I want to share with you a little research.

Analyzing with a simple ASCII->Binary conversion the “WOW!” signal received on 1977, I have noticed a strange figure.

It looks like an alien that is greeting with the left hand, and on the right I think it is a device like a microphone. On the top I think it is the radio wave from an antenna of the signal that the alien is sending into space and that we received.

This message was received in 1977, only 3 years after Arecibo Message, why nobody thought to analyze message in this way? Arecibo Message was composed by many strings of bit that make a figure (bitmap). A reply from the space would have to be composed in the same way.

They maybe not interpreted all Arecibo Message (The formulas for the sugars and bases in the nucleotides, atomic numbers,…). Maybe they only interpreted a part of message like the graphic figure of human and radio-telescope so they replied it using a similar figure. If they have drawn something complex no one would ever interpreted it. So they maybe drawn something that we can interpret easily, like a greeting.

After received this, I asked about how the ASCII -> Binary conversion was done. Marco replied:

I have used this website to convert it: https://mothereff.in/binary-ascii 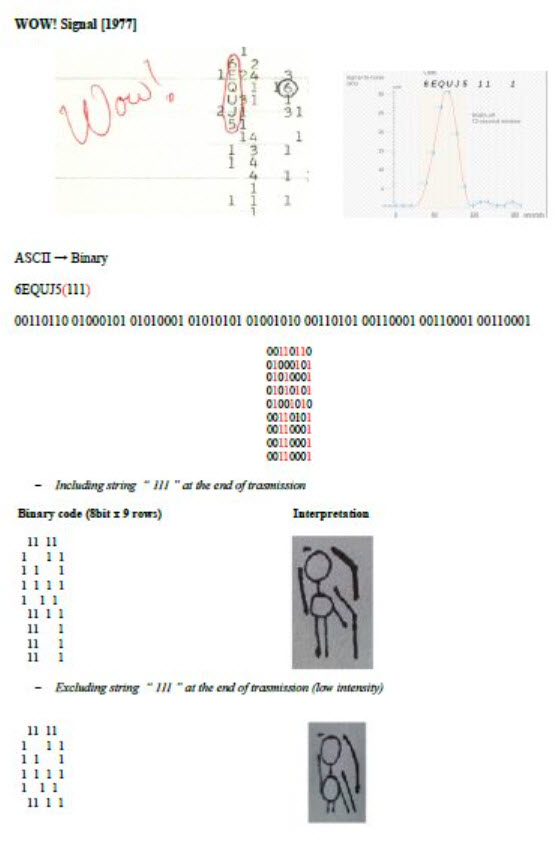