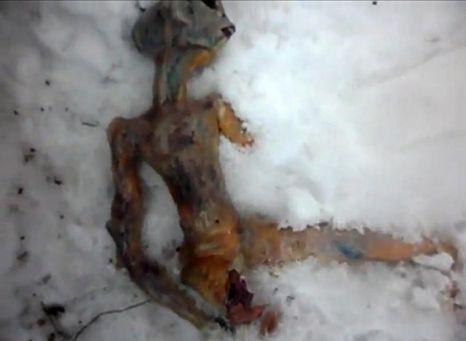 Note from The Black Vault.  It is reported that the following case is a hoax.  The sources are below and they are archived here for reference.

INCREDIBLE footage has emerged of what a group of Russians claim to be the remains of a mangled alien.

The lifeless ‘body’ was supposedly discovered lying in snow in the Irkutsk region of southern Siberia following reports of a UFO crash last month.

The ‘extra-terrestrial’ appears to have suffered horrific injuries — including the loss of one limb.

Shocked villagers had told of seeing a pink and blue glowing object hurtling towards the town before the ‘alien’ was found.

The bizarre reports were taken so seriously, they were investigated by the country’s Emergencies Ministry staff.

The mystery deepened when investigators said no aircrafts were reported in the area.

And search and rescue teams found no evidence of an aircraft crash.

The strange clip has now been seen by nearly 900,000 people since Sunday.

But cynical YouTube viewers have claimed it is an elaborate fake.

One blogger said: “This has got to be a hoax. Why do all aliens have to be naked.”

Source and special thanks: http://www.thesun.co.uk/sol/homepage/news/3533934/Dead-alien-found-in-Siberia-snow.html

A video of what was claimed to be a mutilated alien corpse, which scored hundreds of thousands of views on YouTube, has turned out to be fake.

The tiny “dead alien” is just skin from chicken filled withbread, reports the website 7d.org.ua. Police questioned the men who claimed to have found the “body” and they allegedly confessed to creating it themselves.

The chief editor of the local Kabansk-Info newspaper initially thought that it was the body of an infant in the video and alerted the police. Officers immediately started the investigation and identified the alleged author.

They went to his house and asked him about the infant’s body. The scared man reportedly showed a fake alien corpse. It was even painted in “alien colors”. Scolding is the only possible punishment for such a stunt as it cannot be considered a crime, the report says.

The footage was taken near the village of Kamensk in the Russian republic Buryatia, just north of Lake Baikal, the file’s description said.

It showed what appeared to be a humanoid body less than a meter high with a skeletal big-eyed head and thin naked body. One of its legs was missing.

Emotional off-screen comments said the body was found a couple of hours before and was clearly very dead.

Local media reported there were numerous reports of UFO sightings in the area in March, some of them later attributed to bombing training at a nearby military range.

The video was uploaded on YouTube on April 14. Three days later it was translated into English and its popularity skyrocketed in the following days. It beat the one million benchmark on Tuesday.

Source and special thanks: http://rt.com/news/dead-alien-siberia-body/