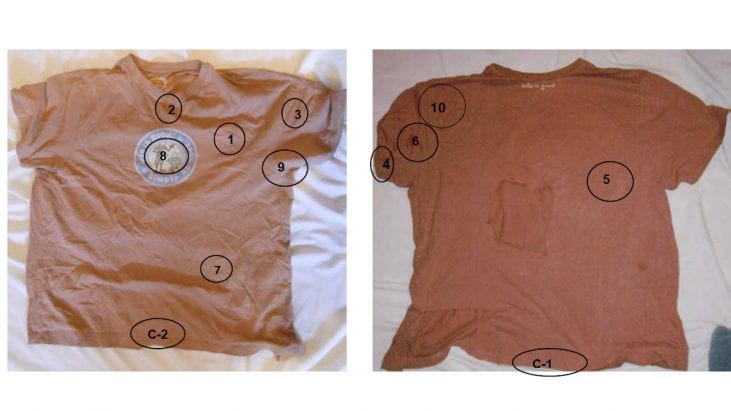 Analysis of a Tee Shirt Worn by an Experiencer during an Event on the Morning of February 6, 2014 (Winnipeg, Canada)

The witness of this event is an experiencer who has had multiple paranormal events most of his life. A strange occurrence happened February 6, 2014 around 4:50 a.m. He woke up quite early (4:30), retrieved the newspaper from the mailbox, poured a glass of water, and sitting on the edge of the bed began to read the paper. The next conscious memory was waking up at 8:30 or 8:45 feeling disorientated. Shaking and trembling went on for 5-10 minutes.

When he went to the bathroom he noticed that the tee shirt he was wearing was turned inside out and backwards. It was placed in a paper bag and stored in a dark warm closet. He also noted a red v-shaped mark on his scalp. Also his cell phone with camera was on. The 1 minute 2 second video recorded a blackened dark room with neon blue/purple lights at the very end. The sounds, besides the television and his heavy breathing, included ruffling, static, clicks and noises of some kind. He noted there was pink discoloration on the shirt. Some of it appeared to fade over time. The shirt was sent to Kathleen Marden and she noted that it faded even more. Also, there was no fluorescence under UV light.

There are two objectives. The first is to look for any anomalous substances on the tee shirt which can be related to an alien experience. The second is to compare these results to those reported in the analysis of the dress worn by Betty Hill during her abduction.

Following is Kathleen Marden’s report of the T-shirt history.

“I asked him if the shirt had been bleached and he replied that it had not been. He stated that the shirt had definitely changed color and was not pinkish prior to the event on 2-6. I asked him to take photos of the shirt and gave him instructions on how to mail it to me in the paper bag. I worried that the evidence might be lost if the package was lost in the mail, so I asked him to cut a 2” swatch from the pink discolored portion of the shirt and a 2” swatch from the tan part of the shirt and retain them at his home. He mailed the shirt to me inside the paper bag that he had placed in a large, padded plastic post office mail bag. It was probably exposed to the cold during transport.

I wrote an inquiry to the witness and he replied as follows: “As I mentioned, when I took pictures it really stood out. I put it back in the bag and when I pulled it out again it didn’t seem as stained as before. The pictures were normal, untouched photos. Try taking some pictures and the areas should come out on film. When I took it out of the bag after 2 weeks it was visible almost everywhere, I took my photos right then and there.” (*I decided not to take photos of the pink stains, as I feared that the flash might destroy whatever evidence might be on the shirt.)

3-20-2014: I inspected the shirt again, before I mailed it to the chemist, and the pink discoloration seems to have faded even more. It did not fluoresce under a UV light. I mailed it to analytical chemist Phyllis Budinger in hopes that some of the pink substance has remained on the shirt.”

When the tee shirt arrived at Frontier Analysis very faint indications of pink remained. Over time, ‘almost’ all the tee shirt restored to its original color. Photographs were taken of the shirt, and it was secured in a resealable plastic bag for several days. A trace of gray material seemed to deposit on the bag. On opening the bag it quickly disappeared/evaporated. Therefore, no testing could be done on it. It was most likely moisture, because it was cooler when the shirt was sealed, and then placed into a warmer environment.

No physical substance could be identified as the cause of the fading/staining on the tee shirt. If a physical substance is the cause, it is either below the detection limits of the testing (trace amounts) or not there at all. It could have dissipated. Another cause may be exposure to some sort of a high energy source. Perhaps the source effected ionization to a higher energy state, on returning to a lower state over a period of time most of the original color of the tee shirt was restored. It was noted a cell phone, which happened to be on during the experience, recorded neon blue/purple lights at the very end of the recording.

The tee shirt is made of cotton. Mostly respiration products, such as perspiration (urea derivatives, acid salt) and skin oil (glycerol fatty acids) are on the shirt. There are indications of detergent residue (carboxylic acid salts, sulfate). Trace amounts of contaminants, such as paraffinic oil and a possible food crumb (particle comprised of protein, carbohydrate plus other components) are also present.

It was noted the respiratory products are more prevalent on the inside of the tee shirt. And, there were more on the inside back than the inside front. It is known that the witness found he was wearing the tee shirt inside out with the back in front of him when he regained consciousness. This suggests that major perspiration occurred prior to when the tee shirt was removed, i.e. in the beginning of the event.

Analysis of a Balloon and Other Samples Associated with a Possible Alien Encounter (October 19, 2005)