Wikipedia documents the sighting as the following:

The 1976 Tehran UFO Incident was a radar and visual sighting of an unidentified flying object (UFO) over Tehran, the capital of Iran, during the early morning hours of 19 September 1976. During the incident, two F-4 Phantom II jet interceptors supposedly lost instrumentation and communications as they approached, only to have them restored upon withdrawal; one of the aircraft also supposedly suffered temporary weapons systems failure, while preparing to open fire.

The incident, recorded in a four-page U.S. Defense Intelligence Agency (DIA) report distributed to at least the White House, Secretary of State, Joint Chiefs of Staff, National Security Agency (NSA) and Central Intelligence Agency (CIA), remains one of the most well-documented military encounters with anomalous phenomena in history, and various senior Iranian military officers directly involved with the events have gone on public record stating their belief that the object was not of terrestrial origin. 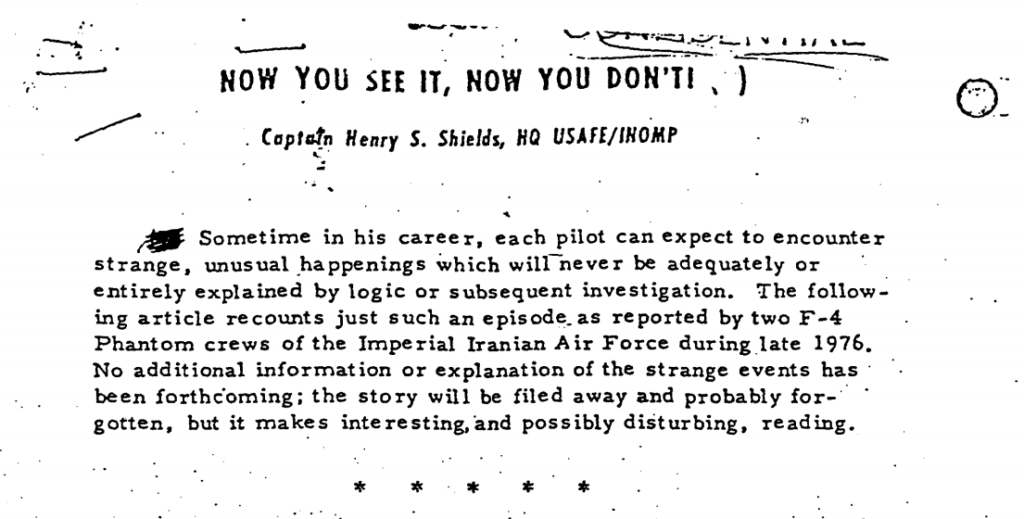 Statement by Captain Henry S. Shields and the “1976 Iran Incident”

The following was created by The History Channel, on the hit series UFO Hunters.  It is archived here for reference and further clarification of General Parviz Jafari: